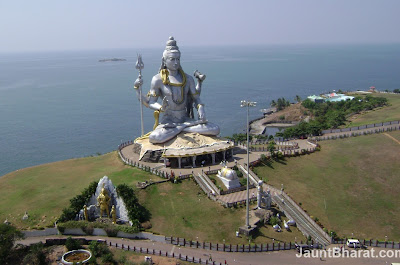 Location : Murudeshwara is a town in the Bhatkal Taluk of Uttara Kannada district in the state of Karnataka, India.

Deity : "Murudeshwara" is another name of the Hindu god Shiva.

Description : Famous for the world's tallest Shiva statue, this beach town lies on the coast of the Arabian Sea and is also famous for the Murudeshwara Temple.

This temple is built on the Kanduka Hill which is surrounded on three sides by the waters of the Arabian Sea. It is a temple dedicated to the Lord Shiva, and a 20-storied Gopura is being constructed on the temple. Two life-size elephants in concrete stand guard at the steps leading to the temple. 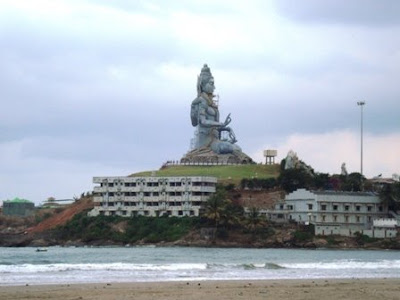 Murudeshwara Fort : A fort present behind the temple is said to have been renovated by Tipu Sultan.

Statue of Lord Shiva : A huge towering statue of Lord Shiva, visible from great distances, is present in the temple complex. It is the tallest statue of Shiva in the world.[1][2] The statue is 123 feet (37 m) in height, and took about 2 years to build. The statue was built by Shivamogga's Kashinath and his son Sridhar and several other sculptors, at a cost of approximately 10 million Rupees. The idol is designed such that it gets the sun light directly and thus appears sparkling.
Posted by Rajesh. CTR at 9:39:00 PM