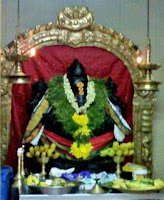 Description : This hilltop temple is the pride and joy of Hindu residents in Kajang town. It is engraved on the temple structure that the temple was initially built in the year 1937. The history of this temple is unique as it was originally a Muneeswaran temple. The main deity was Lord Muneeswaran, and there was also a shrine for Goddess Mariamman, Lord Vinayagar and Lord Murugan.

After being taken over by the new temple committee, the management team decided they wanted to establish Lord Vinayagar as the principal deity of this temple. At that time, an auction was being held at a warehouse in Port Klang. The warehouse owner was selling scrap material which included an abandoned container. This mysterious container had an immense statue of Lord Vinayagar which originated from Tamil Nadu, India. The scrap metal businessman who came to purchase scrap metal was anxious when he discovered the statue of Lord Vinayagar. He did not want the statue to fall into the wrong hands and accordingly purchased the enormous statue. Immediately after the business was concluded, the businessman contacted all Hindu temples in the vicinity to inquire if any temple required a statue of Lord Ganesha. When it became known that a temple in Kajang was looking for a statue of Lord Ganesha, the businessman immediately donated the statue to this temple. Now Lord Ganesha reigns supreme on this hilltop spiritual haven.