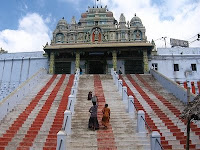 Temple Location :Near Sivakasi Town, Virudhunagar District. The temple is on a small Kundru (not a big Hill)

Sthlapuranam : This sthala perumal, travels like a cool breeze into the hearts of his bhaktas and takes out their sorrow and there by making them happy. Since, the perumal has the character (Thanmai) of the cool breeze and air, this sthalam is called as "Thiruthankaal".

The Moolavar, Nindra Narayanan is found in Nindra Kolam and towards his right side, separate sannadhis for periya pirattiyaar who is called as "Anna Nayaki".

Manmadhan, who is the son of Thirumaal, Sri Vishnu, was made into ash by Lord Shiva and in Krishna Avathaar, he was born in the name of Prathyumnan, as the son of Sri Krishnar. His son is Anirudhan.

Ushai, who was the daughter of Baanasuran, loved the grandson of Sri Krishnar, Anirudhan. But, he has seen him only in her dream. So she ask her friend how to get him. Her friend, Chitralekha got some photos pained and one of the photos, Anirudhan was found and identified by Ushai. Chitralekha, who knows magic, took away Anirudhan, when he was sleeping in his cot. On knowing this, Anirudhan was jailed by Baanasuran. After hearing his Grandson was jailed, Sri Krishnar fought along with Baanasuran and made Anirudhan out of prison and was married to Ushai. This is one of the oldest story told about this sthalam.

Another story about this sthalam is also said and it is related to Lakshmanan, brother of Sri Ramar.

Chandrakethu, who was the son of Lakshmanan had the fasting on Ekadesi and he took his oil bath before the Dhuvadesi came. As a result of this, he became a puli (tiger) and when he came to this Lakshmanan worshipped this sthala perumal and finally got his mukthi.

Periya Pirattiyaar did a strong tapas against Sriman Narayanan. On becoming happy and fully satisfied on her tapas, Sriman Narayanan gave him the Varam that she will become the hamsam of Annapoorani by offering food and shelter to the people of this entire world and said she is the combined and total structure of all the other naayakis - Aanandha Nayaki, Sridevi, Neeladevi and Amirutha Nayaki. And as further to this, the sthalam will be named as "Sripuram" and these are the Varam (Which is given as the prize who satisfies the perumal) given for Sengamala Thaayar. Since, Thirumagal stayed in this sthalam and did the tapas, this sthalam is named as "Thiru thangal". (Thangal means the place of stay).

This sthala thaayar is also named as Jaambhavathi. She was the daughter of the Great Vishnu bhaktas, Jaambhavan who had a great love and bhakti towards Sriman Narayanan. Once in Ramayana time, he wanted to hug SriRamar but Sri Ramar didnt allow him to do so. But, he gave him a promise that in the Krishna Avathar, he can catch hold of him and will be given in Ramavathar, Jaambhavan in Krishnavathar, came towards Krishna to steal the Siyamanthaka mani, for which they bought for s8 days. In Vaamanavathar, he asked Sri Vishnu that he should be killed only by his weapon, Chakkaram. As a result of this, he was killed on the 28th day and at that time, Sri Krishnar made him to remember his past. Jaambhavan was so happy that he was killed by a great person, who takes care of the entire world and asked for a final help to Sri Emperumaan that he should marry her only daughter, Jaambhavathi. As his final wish, the perumal married, Jaambhavathi.

Specials:
The one more feature of this sthalam is the Garudan. Garudalwar is found along with the snake in his left hand and Amudha Kalasam in his hand and giving his seva and other two hands are folded and he found along with 4 hands.

Moolavar and Thaayar:
The Moolvar of this temple is Sri Nindra Narayanan. Also called as "Thiruthankaal appan". Moolavar in Nindra thirukkolam facing his thirumagan along the East direction. Prathyaksham for Salliya pandiyan, Puli, Sri Vallavan and Sridevi pirattiyaar.

Utsavar: The Utsavar of this Divyadesam is Thiruthan Kaalappan is found in Nindra thirukkolam.

Pushkarani:Papha Vinaasa Theertham. It is said that people who take bath in this theertham can attain moksha after their death.