After the floods in may 2015, for the past one year, Pilgrims are allowed only four days in a month at the time of Amavasya and Pournami. So pilgrims get prior information from below contacts before you start your journey to Sathuragiri Temple.

Once upon a time, a devotee was on his way to Sathuragiri. In those days only a few people used to go to the hills, as it was thick forest with lots of wild animals. Since being new to the hills he soon got lost in the thickly populated mountains. Seeing this the Lord asks Kamadhenu, the divine cow to help his devotee and bring him back to the correct path. Kamadhenu immediately appeared before the devotee and lead him to the correct path. After bringing the devotee to the correct path, Kamadhenu, being a divine cow, had to travel back to its heavenly abode. In the process, of starting to fly, Kamadhenu gave pressure to her legs and the pressure was so immense that her hoofs left an indelible mark, that can be seen even today.

Goraknathar is one of the foremost important Indian Siddha. He is part of the 18 siddha tradition of South India. He is also one amongst the Nava Nath Siddha tradition of North India. He is also closely associated with Vajrayana (Tantric) Buddhism. He attained Siddha by mastering sound. The main siddha of Sathuragiri is Goraknathar. Goraknathar created thousands of new siddha medicines like Kayakalpa etc to attain immortality. Every 10th in the Tamil Calendar he appears in light form to his devotees at this place. On every no moon day Sri Kalimuthu Ashram offers a lingam made of Thinai Maavu and the same is worshipped.

As the name speaks, the mountain is mentioned as "South Kailash" (Thenkailayam), Bhoologa Kailayam as Lord Shiva and Parvathy have promised the Siddhars that they will stay here permanently and visit other places only from here. It is also said that it is the meeting place and head quarters of all the Siddhars, who still stay there in various places/caves in the mountain to worship Lord Siva and Parvathi.

It is also said in Siva Puranam that the four Vedas joined together and formed this mountain and that is why it is called Chathur(ved)agiri.

There are three main temples in the hill

One more sanctum of Lord Siva is also there in the top of the hill which is called as "Periya Mahalingam" Big Mahalingam). This is worshipped by Siddhars and only those who are destained to see it will be able to go there. It can be reached with help of the local people called "Palingargal" (Hill tribe people) 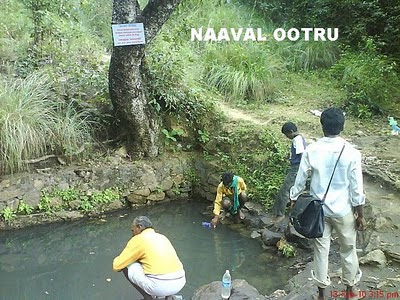 The Akasha Ganga (river) which flows from above the Santhana Mahalingam temple.
Atthiootru, Maangani Ootru (Maavuthu), Arjunaa river and Naval OOtru which are on the way when hiking up.
Naaval Ootru is just below a jambu tree water in it has the taste of Jaman tree and it is said that it is good for Diabetic patients.

The trek to Sadhuragiri starts from Dhaanipaarai, and in about 30 minutes we reach a place called Kudhirai Ootru (a place where yesteryear Rajahs used to tie their horses at this area before proceeding on with their treks)

Then one has to pass the Vazhukkupaarai. As name says it is very slippery to pass this. Then comes Atthiootru, Koonathalaivaasal, so named due to its winding uphill trek, Kaaram pasu thadam, a landmark during the trek, apparently a hoof mark of a cow from which Lord Shiva drank milk from. 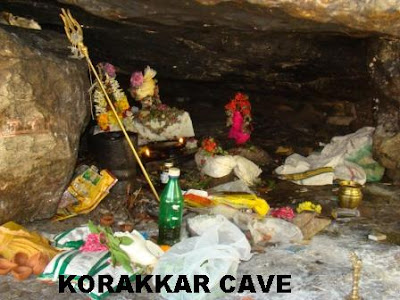 Path after Sangali paarai leads to Korakkar cave (Goraknath cave). After crossing Gorakunda – you can go through the river to visit a small cave here, you will com across Irattai Lingam. 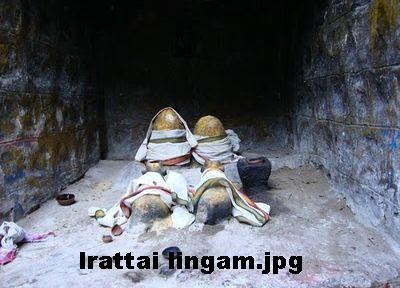 Legend says that a Shivite husband and a Vaishanite wife had an argument on who is the greater god – Shiva or Vishnu, and went into deep meditation in Sadhuragiri to find the answer. God then appeared before them in his Shiva form and Vishnu form to make the couple understand that both are one and the same (Hari-yum Haran-num Onnu). To mark this, both Shiva and Vishnu forms rest here as 2 Lingas, thus Irattai Lingam.

A short trek after Irattai Lingam led us to Periya Pasukkidai, Naaval ootru and to Pacharisi Medu. Pacharisi Medu named because of the small white pebbles found on the path. Then we reached Kuliraati, Chinna Pasukkidai and Vanadurgai, a kaaval deivam (protecting deity) of the forests. Then you reach Pilaavadi Karuppar Sannidhi who is known to be the security guard of Shivamalai. 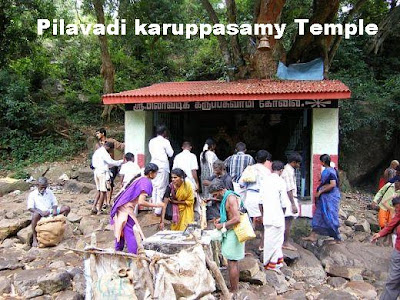 As the name says this shrine of karuppa samy is below a Jackfruit tree (Pala maram) and hence the name came pilavadi karuppa samy.

The legend says that a Siddhar called Kaalanganaadhar has the rare ability to turn normal metal pieces to gold, using mooligai from Sadhuragiri and the right Mantras. After making a whole bag of gold to a guy from a nearby village to assist him in building a temple in his hometown, Kaalanganaadhar still had some left over gold-making essence, gold pieces and herbs. He decided to dig a deep well called Thailakkinaru and hid the precious material in hit. To secure the well further, he created Pilaavadi Karuppar as a guard to protect the treasures not only in Thailakinnaru but the whole of Sadhuragiri itself. 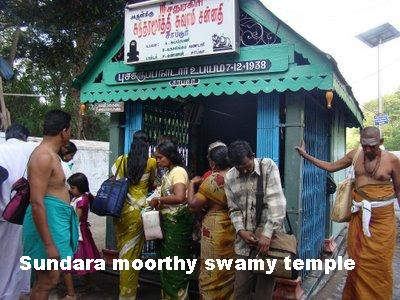 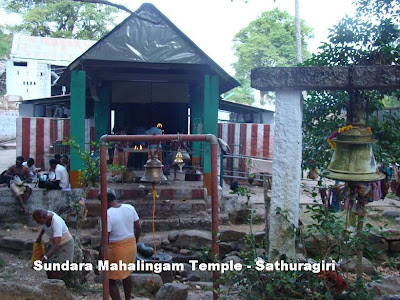 The Sundhara Mahalingam temple, and infront of the temple, flows a stream. It is inevitable that your feet touches the cold flowing stream water before u enter temple premises, so a definite feet wash is done. It is notable that a stream or river runs in front of the 3 major temples in Sadhuragiri. There is a row of shops on either side of the steps that lead to the Sundhara Mahalingam sannidhaanam, selling Pooja products, posters, pictures and what really interested me was these natural incense resins (Saambiraani) 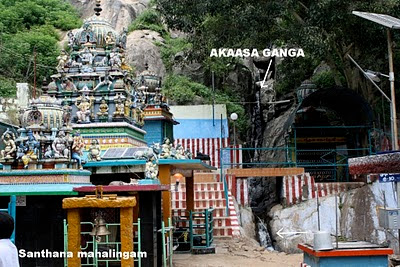 Santhana Mahalingam temple is just 15minutes upward trek from Sundara mahalingam temple. It is only Shiva temple where instead of vibhudhi, santhanam is given as prasadham. Also in this campus are present sanctums for 18 Siddhars, Lord Ganesha, Lord Muruga, Navagrahas, Santhana Mahadevi (Sakthi). The Aagaaya Ganga as it is called, which flows down right behind Goddess Shakthi’s shrine. Inside the Siddhar peedam we can see the cave of Sattamuni, where he meditated and lived. 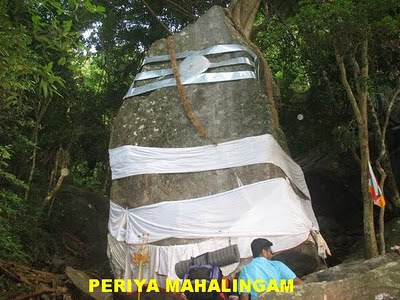 Periya mahalingam is a huge spellbounding swayambu lingam. You can see rocks looking like Balipeetam and Thiruvodu nearby. Also the trunks/roots formation of the tree on top lingam looks like the Jadamudi (hair) of Lord Shiva.

During full moon and new moon devotees visit the temples and pay their penance and have darshan. Pilgrims will climb the mountain only in groups and not in solo, since the forest is full of animals. Those who have strong heart and health are advised to climb up. The new moon during the month of July-August (Aadi Amavasai) attracts about 10 to 15 lacs devotees who come there to have the darshan of the Lord Mahalingam.

Other deities above Sundara Mahalingam inside forest : 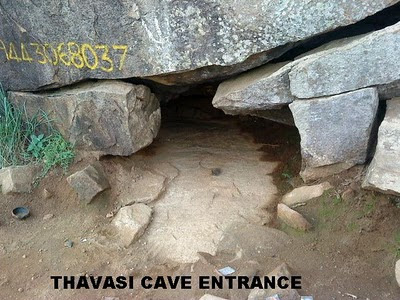 There is Thavasi Cave above the temple. This cave is formed in between Rocks and one has to crawl to go inside the cave. After crawling there is a huge space inside for 12 people to gather and do meditation. This place is illuminated inside by small oil lamps. There is a belief that Siddhars do Tapas here every day and that’s why the name Thavasi Kugai.You cannot enter inside the cave without their permission. 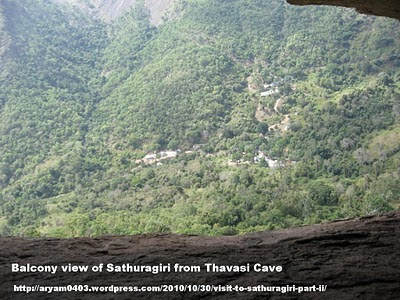 waaw nice work mr.rajesh . i proud of u

If any one need to know more about sadhuragiri or if u want more perfect guidence to go this , pls contact Mr.Prabhakar , his blogspot as follow http://sathuragirisundaramahalingam.blogspot.com/
, here u can get his all details includig phone number , he only guided me , how to go there , ofcourse that may be a god's & sidhars intension.

Yes there is another way for Sathuragiri temple through Theni.

thanks ....for the blog its helpful to me

is the trekking will be easier or tough becoz we r going with our family who r aged above 50..kindly send the reply to my mail id mahesh.venkatachalam@hotmail.com

but one thing friends yours plan to go sadhuragiri in the night time dont walk in eve
6.00

Those wishes to come for Sathuragiri can take bath and rest at Sivasangu Ayya Ashram at thaniparai.Annadhanam also provided free of cost. for details kindly ctct: 94433 24583/ 04563 201685

I interested in saduragiri yathirai...but know that place ...which days staying that place I don't know. Anyone helpme nd send my mail id....muralisaissrathy80@gmail.com

i heard that there is a scar above sundhara mahalingam's right eyebrow... is that true?

Prabhakaran, Pls provide u r present contact number. i need to go to sathuragiri..need u r guidance. my num is 09741778810

Chadhuragiri is one of the most powerful place where people can realize the rareness,dearness, costliness and preciousness. OM NAMA SHIVAYA

How to come from Chennai.. Car parking, hotels available... Is it possible to get back in the evening.. What is the best time to visit