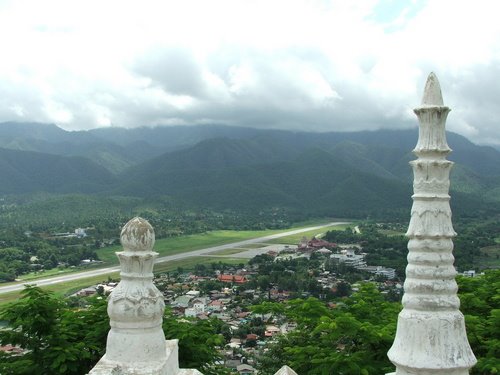 This temple is located on Doi Kong Mu hill to the west of Mae Hong Son city in Thailand.

Standing on top of Doi Kong Mu hill and visible from most places in Mae Hong Son town is the Wat Phra That Doi Kong Mu, a Burmese style temple founded in 1860. The temple comprises of several structures including two chedis and two viharns. The atmosphere atop the hill is one of tranquility and serenity.

The oldest structures of the temple are two large whitewashed chedis (stupas). The largest chedi was built in 1860. Its lower section comprises of several octagonal shaped tiers of receding size. Around the base are niches enshrining images of the Buddha. The chedi is topped with a golden spire. It enshrines the ashes of Phra Moggallana, one of the chief disciples of the Buddha.

The smaller chedi enshrines the ashes of the first governor of Mae Hong Son, who built the structure in 1872. The lower section comprises of several square shaped tiers of diminishing size. At each of its four corners is a Chinthe, a lion standing guard accompanied by a Naga, the mythological snake. Niches standing in front of the chedi enshrine Burmese style Buddha images. The chedi is topped with a golden spire.

Away from the two chedis stands a larger Burmese style viharn. As opposed to the Lanna temples of the North and the Rattanakosin temples of Central Thailand, the floor plan of the viharn is on an horizontal axis, allowing a wide view of the building when approached from the front. The roof comprises of several sections. At the center is a Pyatthat, a very ornate Burmese style structure consisting of multiple tiers of receding size. The Pyatthat is topped with a hti, a Burmese style finial. The fairly simple interior enshrines the principal Buddha image in subduing Mara posture, as well as several other images.

Higher up the hill overlooking Mae Hong Son is a Buddha image in subduing Mara posture, seated on a high pedestal. The image is guarded by a pair of white and gold guardian Chinthe lions. On top of the hill is another small temple building topped with a Pyatthat roof. The stairs are guarded by mythological Naga serpents. In front of it is a large standing Buddha image wearing a golden robe.

The top of Doi Kong Mu hill provides 360 degree views of Chong Kham Lake, Mae Hong Son, the Pai valley and the airport to one side and the forested hills of Burma to the other side. The hill is a popular place to watch the sunrise and sunset. At sunrise the valley is often covered in early morning mist. At sunset the sun disappears behind the Burmese mountains. Near the carpark is a small coffee shop.

How to get to the Wat Phra That Doi Kong Mu

The temple is located on top of Doi Kong Mu hill, almost one kilometer West of Chom Kham Lake and Mae Hong Son town. The easiest and most comfortable way to get there is by tuk tuk from town. Alternatively, walk to the top. Two paths lead up the 250 meter high hill. One starts at the Wat Phra Non, the other at the Wat Muo Taw.