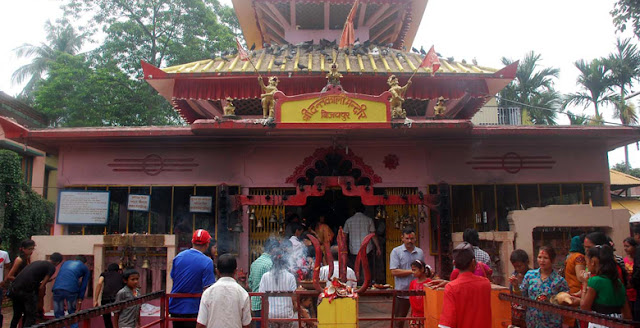 Location : Vijapur Hill in Nepal. From Bhanu Chowk walk eastward for 15 minutes and you will enter the lowest point of Vijayapur Hill and you will see the first temple here, Pindeshwor Temple. From there walk uphill for about 10 minutes on the main road to reach Datankali Temple.

Legend :
This holy temple is famous to Hindus as Teeth fallen place of Satidevi (wife of Lord Shiva).According to Hindu myth Lord Shiva carries the body of death wife (Satidevi) on his back and walked to different places.As he walked on the Teeth fell in the place where the temple is situated now.

Surrounded by the beautiful hills in Bijaypur the temple of Dantakali or the the tooth goddess is situated. It is one of the major Shakti Peeths in Nepal and holds a great religious significance. The area of the temple is also very attractive with green hills and a panoramic view of Terai and Dharan bazaar.

The temple, in its present form, was built by locals after 1978 AD and consists of a cement and brick structure with three roofs and a metal pinnacle on the top. Housed within the temple is the actual object of worship -- a silver-plated rock in the shape of teeth, which are said to Sati Devi's.

The hill of Vijaypur once formed the Eastern frontier of the medieval kingdom of Vijaypur, and, besides Dantakali, it consists of numerous other temples, namely Bhatabhange, Panchakanya, Budhasubba, Gadi Ganesh, and Pindeswor. Devotees of Kali visit Dantakali during the festival of Navaratra and also on Saturdays.

The temple observes the presence of maximum number of devotees in Navaratri (nine nights) during the festival of Dashain. Also, on the occasion of Maha Asthami, mass sacrifices of he-goats take place on the temple premises.

http://travelgolpo.com/asia/nepal/dharan/dantakali-temple/
Posted by Rajesh. CTR at 7:49:00 PM No comments: