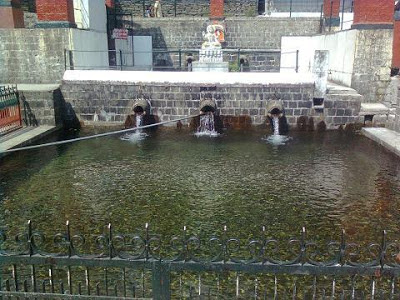 The Bhagsunag temple lies approximately 2 km east from McLeod Ganj and is on the same route to the Bhagsunag waterfalls and the temple is a popular side excursion from the main trip. McLeod Ganj is a suburb of Dharamshala in Kangra district of Himachal Pradesh, India.

The Bhagsu Nag temple is dedicated to the Hindu god Shiva but also the serpent god (Nag). The village, temple and water fall are named after the king who discover the spring (king Bhagsu) and the serpent god who guarded the region (lord Nag). The two were involved in a forceful battle as the king required the water for his drought hit lands.

The king had enrage the Serpent lord Nag after his sneaky approach to steeling the water and it was Nag who ultimately won the battle. Where the king submitted to the serpent waters miraculously sprung from the ground where he stood and these are the springs that the temple is constructed upon. The region is named after both the king and the serpent - Bhagsunag.

Bhagsunag temple is an important Hindu temple which is located on the source of a natural mountain spring. The waters of the temple are considered holy with the ability to wash away aliments and illness.

At the heart of the temple complex are two sacred pools in which devotees are able to bath in. The water is fresh mountain spring water filtered through layers of limestone which lie below the Dhauladhar mountain range. The water is pumped into the pools via large pipes and is extremely cold so only the deeply religious should consider bathing.

The temple is one of the oldest in the region but the present day reincarnation is heavily influenced by Nepalese design styles. The Bhagsu Nag temple has stronger Nepalese design features than classical Hindu styles as the ferocious Gurkhas of Nepal captured the entire Kangra Valley. With the arrival of the British the Nepalese were amalgamated into the Indian army but the temple remained an important spiritual site for the Gurkhas. The clearest example of the Nepalese design are found at the pipe mouths which have been shaped into dragons heads. 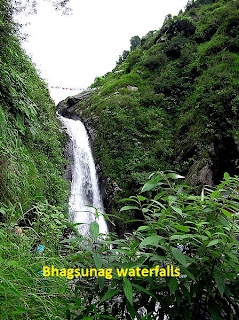