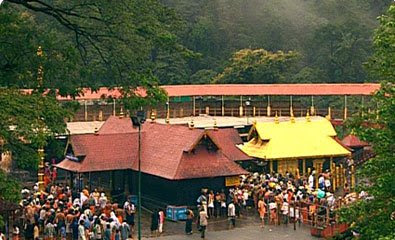 Location : Sabarimalai, High up in the Sahyadri Mountains of Western Ghats, Kerala

Stala Purana : Sabarimala Sri Dharmasastha Temple is the most famous and prominent among all the Sastha Temples. It is believed that "Parasurama Maharshi" who retrieved Kerala from the sea by throwing his axe, installed the idol of Ayyappa at Sabarimala to worship Lord Ayyappa.

There are three ways for reaching the temple.

(a) The Erumeli route - the most arduous - the pilgrims cover about 61 km on foot through forest and hill track.

(b) The Vandiperiyar route - starts at 94.4 km stone on the Kotayam - Kumili road.

(c) The Chalakayam route - the easiest of all. Chalakayam is near Pampa river. Sannidhanam is just 8 km from here.

Pilgrimage Regulations :
Sabarimala pilgrims have to observe several austerities and regulations to undertake the pilgrimage.

The vritham can be undertaken only after getting permission from one's parents and Guru. It should be undertaken in such a manner as to cause no inconvenience to one's family.

The day before the vritham begins one has to offer prayers to ones' family deity and present a yellow cloth with coins within to the family deity.

The devotee must shave, clip his nails, trim his hair and bathe before the vritham. The holy garland should be cleaned and smeared with sandal paste and placed before the portrait of Lord Ayyappa. The devotee should also buy a new pair of coloured dhoti and towel or shawl.

On the day of the vritham the devotee rises early, bathes, prays to the family deity and performs a pooja to the holy mala. He will be accompanied to the temple by his Guru and recieve his mala from him.

Wearing the mala denotes that the devotee becomes Lord Ayyappa and must thus lead a pious life.

The devotee must keep away from all social activities and spend his time praying and singing bhajans and in worthy causes like visiting temples, cleaning temples, feeding the poor, helping the poor and sick and attending religious discourses.

He must eat only vegetarian food and abstain from meat, physical or verbal violence, alcohol and tobacco and intoxicants in any form. The devotee must sleep on the floor, use a wooden block for a pillow and walk
barefeet.

The devotee is obligated to treat all co-devotees as Lord Ayyappan and serve them in every way. He must be humble despite the respect and privileges accorded to him as a Sabarimala pilgrim.

The devotee must treat all women like his mother and strictly follow celibacy. He must not oil his body or his hair and must always carry a tulsi leaf with him to keep away evil thoughts

18 Holy steps :
Pathinettapadi (18 divine steps) to the sanctum sanctorium is divine in all aspects. The first three steps depict "Bhoomi, Agni, Vayoo & Akash", 6 to 9 steps for Karmendriya, 10 to 15 for Jhanandriya, 16th for mind 17th Intelligence and 18th Jeevathma Bhava. Those who cross all these steps are believed to achieve "Punyadarshan". The steep steps are so important and holy that no one can climb them without fasting for 41 days and carrying the holy irrumudi on ones' head.There are many mythological stories associated with the holy Patinettampadi. Some believe the eighteen steps denote the 18 puranas. Some say that 18 weapons with which Lord Ayyappa destroyed the evil denotes the 18 steps. Others are of the belief that the first five steps denotes the indriyas (eyes, ears, nose, tongue and skin). The next eight steps signifies the ragas (tatwa, kama, krodha, moha, lobha, madha, matsraya, and ahamkara. The next three steps signifies the gunas (satwa, rajas and thamas). The seventeenth and the eighteenth denotes vidhya and ignorance.

Trekking attractions :
KariMalai - Highest peek on the way to temple. The sand here is Black and hence the name Karmalai. On the top of karimalai there is a Sunai with Drinking water. It is said that Lord Ayyappan created this with his Bow & Arrow.

Good one!
A small correction. Karimalai is not called so, because of its sand being black. Karimalai has only the clay soil which becomes slippery during rainy days.
In ancient Thamizh (Tamil), Kari means Elephant. As many Elephants live in that hilly forest, the name became Karimalai. Also just before Karimalai, at the foot hill there is a place called Karivalanthodu, where there is a stream of water flowing. It is said that, many Elephants come here to quest their thirst and hence that place too is known as Karivalamthodu (Kari-Elephant, Valam-Roaming, Thodu-Water stream).