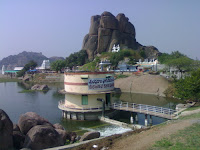 Description : Set on a hilltop between Hanumakonda and Warangal, the Bhadrakali temple is noted for its stone image of the Goddess Kali. She is depicted with eight arms and carries a weapon in each hand. Bhadrakali Cheruvu is adjacent to this temple.

Major Attractions of Bhadrakali Temple : High point of Bhadrakali Temple is an artificial lake of 2 ½ kms radius in the vicinity of the temple. Number of natural rock formations in the surroundings add to the spiritual charm of the temple and are the most dominant feature of the temple. Some of the unique shaped rocks are said to carry immense spiritual powers. The structure of the temple is said to be 250 years old. Though the image of the deity is called the Bhadrakali, the goddess is said to have been transformed by the mantras into a very rare form called the Tripura Sundari, which includes the Kali form. Tripura Sundari is regarded as the supreme manifestation of Prakriti - the feminine power which is the vital energy of the universe. Literal meaning of Tripura Sundari is 'The Beauty of the Three Worlds' or more precisely the three Cites or 'Pura'.

Best Time to Visit Bhadrakali Temple : The best time to visit the famous Bhadrakali Temple in Warangal is the Telegu month of ‘Sravana’ which corresponds to the month of August - September according to Gregorian Calendar. At this time a festival is organised and the deity is aesthetically decorated in various forms. Housing about 8 major and 12 minor temples surrounding mountains of Bhadrakali Temple exude a sacred aura when a large number of devotees gather to offer prayers.

People who visit Bhadrakali Temple also visit Hanamkonda Fort which is just a kilometer away from the another well known thousand pillared Hanamkonda Temple. Inside the fort is the Siddeshwara Temple housing a small Linga shrine.
Posted by Rajesh. CTR at 8:34:00 PM