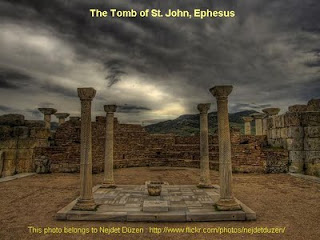 The basilica is on the slopes of Ayasoluk Hill near the center of Selçuk, Izmir Province in Turkey.

It is believed that the Apostle John fled from Jerusalem to the city of Ephesus where he remained for the rest of his life and it is also where he wrote his gospels as well as receiving the last Revelation of Jesus and wrote the Apocalypse.

During his time and until his death in Ephesus, Apostle John preached about Christianity. According to legend, before he died, Christ, along with all the other apostles, visited Apostle John and said to him:
Legend had it that John wrote his gospel in Ephesus at the request of other disciples, then died in the church named for him on Ayasoluk Hill. Later legends developed that he was not really dead, but sleeping, and dust could even be seen moving above his grave as he breathed.

The 13th-century Golden Legend narrates John's death as follows:
According to Isidore, when John was 98 years old, that is, in the 67th year after the Lord's passion, the Lord appeared to him with his disciples and said: 'Come to me, my beloved: it is time for you to feast at my table with your brothers!' John rose and was about to go, when the Lord added: 'You will come to me on Sunday.'

When Sunday arrived, all the people gathered in the church that had been built in his name, and John preached to them at cockcrow, exhorting them to be steadfast in the faith, and zealous in carrying out the commandments of God. Then he had them dig a square grave near the altar and throw the earth outside the church.

He went down into the grave and, with arms outstretched to God, said: 'Lord Jesus Christ, you have called me to your feast: here I am, and I thank you for deigning to invite me to your table. You know that I have longed for you with all my heart!' When he had said this, he was surrounded by a light so brilliant that he was lost to human sight. Then, when the light faded, the grave was found to be full of manna. This manna is still produced there to this day, and it covers the floor of the grave, looking rather like the fine grains of sand at the bottom of a spring.. Because of this, the dust, called manna, was said to be able to cure the sick.

The tomb itself acted upon its miracle every year on the 8th of May, during an all night-festival in honor of St. John, for nearly a thousand years, prompting many pilgrimages throughout the medieval period.

The pilgrims who journeyed to Ephesus did not leave empty-handed. Flasks were produced at St. John’s tomb for the pilgrims. These flasks usually had the Saint’s image designed on to it as well. They were used to collect the dusts that would appear around St. John’s tomb, which was then carried back to the pilgrims respective homeland where it was said to have performed miracles by curing sickness and even calm storms on land or sea.

The Basilica of St. John (St. Jean Aniti) was a great church in Ephesus constructed by Emperor Justinian in the 6th century. It stands over the believed burial site of St. John, who is identified as the apostle, evangelist (author of the Fourth Gospel) and prophet (author of Revelation).
The basilica is on the slopes of Ayasoluk Hill near the center of Selçuk, just below the fortress and about 3.5 km (2 miles) from Ephesus.

St. John's grave was marked by a memorial and enclosed by a church of modest proportions in the 4th century. In the 6th century, Emperor Justinian (527-65 AD) believed that a tomb dating from the 300s was John's, so he built a magnificient church on the site dedicated to the saint.

The traditional tomb of St. John, located under the main central dome, elevated the site to one of the most sacred sites in the Middle Ages and thousands made pilgrimage here.

But with the decline in importance of Ephesus and after Arab raids, the basilica fell into ruins until the Seljuk Aydinoglu clan converted it into a mosque in 1330. The building was then completely destroyed in 1402 by Tamerlane's Mongol army.

The ruined church was thereafter pillaged for building materials, but recent restoration enables visitors to understand its size and visualize its former splendor. 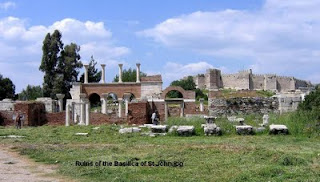 http://en.wikipedia.org/wiki/Basilica_of_St._John
Posted by Rajesh. CTR at 8:08:00 AM No comments: Links to this post 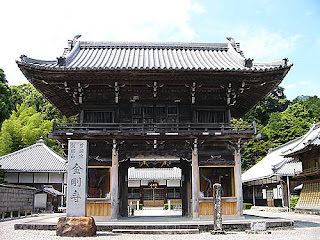 The Japanese seaside town of Rikuzentakata (of Gojo, Nara Prefecture)  is home to a tiny temple called Kongoji. It's perched on a hillside and is one of the few structures still intact after recent Japan's earthquake and tsunami of 2011.

Amanosan Kongoji Temple, was founded by the venerable priest Gyoki in the Tempyo era (729–749) on the order of Emperor Shomu. Amanosan Kongoji is the main temple of the Omuro school of the Buddhist Shingon sect, where the monk Kukai (Kobo-daishi) is said to have undergone religious training in the Konin era (810–824).

The temple buildings and pagodas became dilapidated later. However, since the temple was worshiped at and supported by the ex-emperor Goshirakawa and his sister Hachijo-nyoin in the late Heian period (12th century), the temple buildings were reconstructed by the holy priest Akan from Koyasan (a mountainous, sacred place where the headquarters of the Shingon sect is based).

Hachijo-nyoin received from the Koyasan headquarters the image of Kukai drawn by the princely priest Shinnyo, and enshrined it in Amanosan Kongoji’s mieido (hall in which the image/statue of the sect founder is enshrined). In contrast to Koyasan, where women were not admitted, Amanosan Kongoji Temple allowed women to worship Kukai inside the temple. This is the reason why Amanosan Kongoji was dubbed “Nyonin Koya” (literally translated as “women’s Koyasan”).

In the Northern and Southern Courts period in the 14th century, the temple was used as a temporary abode for Emperor Gomurakami, and was called Amano-angu. Amanosan Kongoji Temple possesses a number of national treasures and important cultural properties. The temple’s garden, created in the Muromachi period (1336–1573), brims with seasonal beauty throughout the year, such as cherry blossoms in spring and colorful foliage in autumn.

www.osaka-info.jp/en/search/detail/sightseeing_205.html
Posted by Rajesh. CTR at 1:20:00 PM No comments: Links to this post