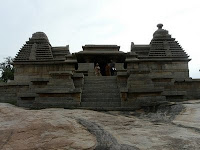 Location : Hampi is located within the ruins of Vijayanagara, the former capital of the Vijayanagara empire

Legend : Myth have it that it’s on this hill that Lord Siva (the god of destruction) did penance before marrying a local girl Pampa. Siva was impressed by her dedication for him and consent to marry her. On this it rained gold on this hill. Hema in Sanskrit language means gold. The name of the hill thus connects with this legend.

Also this is the place where Siva burnt Kama (the god of lust) with his third (fire) eye. In helping Pampa to marry Shiva, Kama distracted Shiva from his penance. This attracted the wrath of Siva and eventually killed Kama by fire. Later Rathi (goddess of passion and Kama’s wife) pleaded for the life of Kama. Siva brought him back to life but only in character not as a physical being.

Hence a number of temples in this area are dedicated to Lord Siva, the major one being the Virupaksha temple at the north of this hill. This place packed with the largest number of pre Vijayanagara temples.

Description : This hill is sprinkled generously with a large number of temples, archways and pavilions. The whole of the hill was fortified with tall wide stonewalls, the ruined remains of which can be still be seen. Once you have reached (about 15 minutes climb) the top, it’s almost a flat expanse of rocky sheet with occasional ups and downs.

Hemakuta Hill is one among the best places in Hampi to see the sunrise and sunset; and not as tedious to reach the top say compared to the Matanga Hill nearby. Good news for the ones who find it difficult for a steep climb.

The chain of temples on Hemakuta Hill You can access it mainly through two ways. The first is through the tower located close to the Virupaksha temple’s main entrance. From the very end of the Hampi Bazaar that terminates in front of the Virupaksha temple, take the left (southward) alley. You can see the giant but topless tower to the hilltop.

The second access point is through the twin storied archway located near the Sasivekalu Ganesha & Kadalekalu Ganesha shrines. The top locations near this archway is a great place to get an aerial view of the Krishna Temple campus just south of it; and the Lakshmi Narasimha & Badivilinga shrines located beyond the Krishna temple.

Thanks to its architecture these temples are mistaken for Jain Temples. In fact most of them are dedicated to Siva worship. These smart looking compact temples with pyramid-like roofs resemble that of the Jain temples.

A number of temples located on the northern end of the hills are made in what is called the Trikutachala style. That is, three shrines positioned perpendicular to the next face a common central hall. The outer walls of the temples are plane but for the horizontal chain of floral motifs carved around. The fluted foundation and the curvy eaves overhanging are other typical features on the exterior.

You can find a series of such temple complexes scattered all over the hill top. One can easily count at least three dozen structures in the vicinity. The largest and the most elaborate ones are located on the northern slop of the hill facing the Virupaksha temple campus. These are in fact one of the oldest clusters of temples in Hampi, much older than the empire itself. The chain of temples on Hemakuta Hill (northern side) You would be first visiting this locale if you reach the hilltop from the Virupaksha temple. The whole area looks more like a gigantic sheet of rock with undulation.

Further up and a bit south you can spot a pond in the courtyard of a shrine. This shrine called the Mula (the original) Virupaksha temple is older than the grand Virupaksha temple. The front hall of this whitewashed shrine spots a series of cubical pillars of pre-Vijayanagara style. Interestingly, the porch faces the water body and the steps from the porch lands into the water. This is one of the few shrines in this are that are under active worship.

Just behind this is a tiny chamber like shrine with a pyramid roof. A Hanuman image is installed inside the shrine. This is one of the finest spots to witness a Hampi sunrise/sunset.

When you move further south, you practically get an aerial view of the Krishna Temple, Sasivekalu Ganesha, the twin monuments of Lakshminarashiha and Badavilinga shrine. At this point you can spot the two storied southern gateway to the hilltop. This area too has a number of temples built in the pre-Vijayanagara style architecture. Some of them even spots tall monolithic lamp posts inform of it. The exit through the gateway leads you to a short flight of steps carved on the rock surface. This flight of steps brings you to the Sasivekalu Ganesha statue.

The whole of Hemakuta Hill area is encircled with an ancient fortification. Though broken at many places, you can still make out the boundary line circling the hill.

One can easily spend a couple of hours hang around and check out various movements on this hill top. Though located at the very core of Hampi, the relative calm of the place is a pleasant surprise.