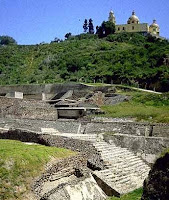 It is the world's largest monument and largest Pre-Columbian pyramid by volume.

The temple-pyramid complex was built over many dozens of generations, from the 2nd century BC to the early 16th century, and was dedicated to the deity Quetzalcoatl. It has a base of 450 by 450 m (1476x1476 ft) and a height of 66 m (217 ft). According to the Guinness Book of Records, it is in fact the largest pyramid as well as the largest monument ever constructed anywhere in the world, with a total volume estimated at 4.45 million m, almost one third larger than that of the Great Pyramid of Giza in Egypt. The Aztecs believed that Xelhua built the Great Pyramid of Cholula.

Today the pyramid at first appears to be a natural hill surmounted by a church. This is the Iglesia de Nuestra Señora de los Remedios (Church of Our Lady of the Remedies), also known as the Santuario de la Virgen de los Remedios (Sanctuary of the Virgin of the Remedies), which was built by the Spanish in colonial times (1594) on the site of a pre-Hispanic temple. The church is a major Catholic pilgrimage destination, and the site is also used for the celebration of indigenous rites. Many ancient sites in Latin America are found under modern Catholic holy sites, due to the practice of the Catholic Church repurposing local religious sites.

Because of the historic and religious significance of the church, which is a designated colonial monument, the pyramid as a whole has not been excavated and restored, as have the smaller but better-known pyramids at Teotihuacan. Inside the pyramid are some five miles (8 km) of tunnels excavated by archaeologists.