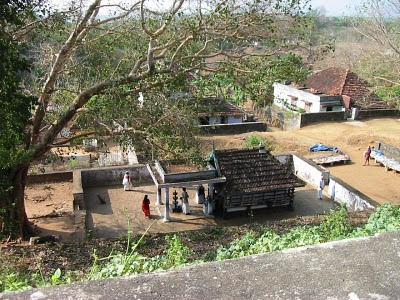 The place Tiruvilwamala is situated in Talappilly Taluk of Trichur district attains great prominence. Vilwadrinatha temple of Tiruvilwamala has a rich heritage in the history of temples. The place is famous for its serene and picturesque beauty.The hills and the Bharatapuzha river (which is only half a mile from the temple ) adds natural beauty to this place. These hills are called Vilwamala which is why Lord Sreerama is also called Vilwadrinathan. The temple of Vilwadrinatha is the most important of all the ‘Beejakshetras’.

The main deity being Sree Ramabhadraswamy and Lakshmana Swamy, the Upadevas of this temple are Lord Mahaganapathy, Lord Veera Hanuman, Lord Ayyappa with Lord Shiva and Goddess Parvathi on the same pedestal.

Being a very old temple there are lot of intresting legends about this temple.

1. Sri Vilwadri Mahatmya, a Sanskrit text with 18 chapters, describes the origin of this ancient temple. It is in the form of a conversation between Uma (Parvati) and Maheswara (Siva). According to this, Bhargava Rama, as Parasurama is called, prayed to Siva for the liberation of his pitrus. Pleased with the prayers of Parasurama, Parameswara granted him the image of Vishnu which He Himself was worshipping. Parasurama, in his search for a suitable place for the installation of the deity, came across the beautiful Vilwadri, full of Amala trees. He constructed a temple here, consecrated the deity and laid down the pooja routine. He brought the pirtus and got them liberated as a result of the darshan of the divine deity. The place he settled down finally is still known as Bhutan mala. Self born Image The image in the sanctum facing west is Swayambhu or self born.

It is the believed that the idol here is the one, which is worshiped by Siva in Kailasa. It is four to five feet tall and is permanently fitted with a gold plated cover for the protection of the image.

It is said that there used to be a hole on the pedestal in front of the deity. The. water filled here was served as tirtha. Once a piece of kadali plantain fell into this. The priest tried to remove this by piercing the hole with a sharp instrument. He heard a cracking sound of the stone and the tool fell from his hand. The tirtha also dried up subsequently. It is believed that below the sanctum there is a cave and also a golden Vilwa tree. Some say, it is because of this that the place came to be called Vilwamala.

2. When the news of this holy shrine which Parasurama installed, spread widely, Pandavas too decided to visit this place to conduct the ceremonies for the moksha of their pitrus. They came to the banks of the River Bharatapuzha( which is also known as the Ganges of Kerala) and conducted the ceremonies under the guidance of Lord Krishna. They built a temple, there for Lord Krishna, which is now popularly known as Ivormadom Sreekrishnaswamy Temple.

3. The story of the origin of Swayambhu deity in the west is related in Vilwadri Mahatmyam. According to this, Aamalakan, son of Kashyapa Prajapati started rigorous tapas to propitiate Lord Mahavishnu. The asuras became panicky. They thought that this severe penance would bring about their ruin. They tried to create terror in Aamalakan. Aamalakan opened his eyes which emitted sparks of fire. The asuras died on the spot. The heap of the dead was transformed into rock. This is one version as how the name rakshasapara came into being. Sage Aamalakan continued his prayer. Pleased, Lord Mahavishu appeared before him asked his devotee to name any boon. Aamalakan said he desired nothing, but unstinted devotion. He also requested the lord to remain there for the protection of those who suffer in this world. Mahavishnu agreed and transformed into a deity.

4. The other version of how name rakshasapara came into being is that, The popularity of this two shrines and the power of Lord Mahavishnu increased enormously as a result of which, the asuras became furious. It is believed that on one ekadasi day, the Asura Kumbhanasika tried to stir the image on the sanctum on the western side. Lord Mahavishnu appeared and took hold of Kumbhanasika and other asuras and pulled them into a cave towards the south. They were locked up there. This particular place is what we now call the “rakshasapara”.

5. It is also said that the pathway inside the cave seen near the peepul tree close to the eastern gateway of the temple had been connected to ‘Tirunelli’ through an underground passage. The story goes that when a priest returning through this passage after worshipping the deity at Tirunelli, the young lady walking in front showing light to the priest got impure and consequently the underground passage behind was sealed forever. Even now a part of this underground passage where extreme darkness prevails is explorable.

7. Since Parasurama’s time, Punarjani is a symbol of freeing oneself of all sins. The ritual crawling through the cave takes place on the full moon Ekadesi day in the malayalam month of Vrischikam. It coincides with Guru Ekadesi.

The temple has an enormous courtyard. To the southeast side of the courtyard is the idol of Veera Hanuman. There were two instances when fire broke out in this temple. It is well known that after the installation of this idol of Veera Hanuman, such a calamity never arised. This idol has immense power and devotees offer Vadamala, Vettilamala, Aval nivedyam etc to please Anjaneya, the beloved devotee of Lord Sreerama. 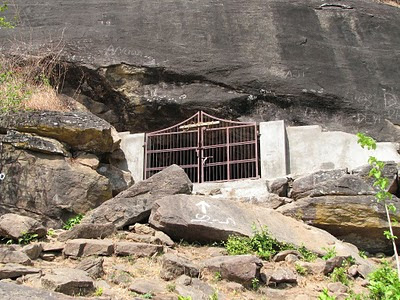 The main attraction in the temple is the ‘Punarjani Guha’ (cave). The "punarjani" cave is in between the Vilwamala and the Bhoothamala. The Punarajani cave is a natural 15-meter long tunnel in the rocky cliff. It is believed that by crawling through the tunnel from one end to the other, one washes away all his sins and thus attains rebirth. The ritual is known as ‘Punarjani noozhal’. Once we enter the Punarjani cave it takes about 45minutes to reach the exit.

At 3.30 am on the auspicious day, the priest accompanied by his aides and ritual music heads to the Punarjani. After the rituals at the mouth, the priest drops a gooseberry into the cave. The sight of the gooseberry emerging from the other end of the cave is amazing. The movement through the cave demands all kinds of bodily postures like standing, sitting, creeping, crawling etc. Only men are allowed to perform this ritual, while women can only visit the cave. The ritual is practiced only in one day in an year, the Guruvayur Ekadasi day in ‘Vrischikam’ (November-December).

It is believed Sage Parasurama reached here to atone for his sin of massacring Kshatriyas. Since Par...

Read more at: https://travel.manoramaonline.com/travel/essential-kerala/2018/07/03/thiruvilwamala-thrissur-palakkad-cave.html
It is believed Sage Parasurama reached here to atone for his sin of massacring Kshatriyas. Since Par... 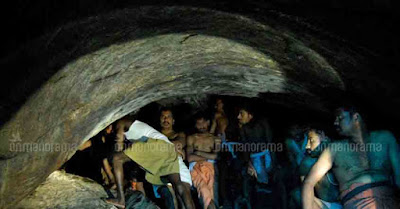 1. Before starting to Punarjani we have to touch the “Ganapathi theertham” (which never gets dried up) on the northern side of the mountain about quarter of a mile eastwards from the temple.

2. Next we can reach a steep rock about seventy feet high on travelling about one and a half miles over the mountain. The broad “Papanasini Theertham” is seen if we proceed a little further in the southwest direction over the narrow projection on the rock. This was made by Parasurama and the presence of Ganga has been brought in this Theertha. Railings have been provided here for the devotees to walk easily without fear of falling down from the narrow projection of the rock.

3. After making the Punarjani noozhal, custom is to go to papanasini again to purify the body and then go to the entrance once again. Next the devotees have to bathe or wash their hands, feet and face in the “Pathala Theertha” on the west at a distance of about thirty feet. It is believed that Parasurama who had brought the presence of the purified water of “Brahmakamandalu” here made this also.

4. The next step is to take holy water in our hands from the “Kombutheertha”, which was formed when Indra’s elephant Iravatha struck his tusk on the rock.

5. Nearby lies the “Ambutheertha” from which water has to be taken out using some stick or anything like that. People believe that one “Janma” or span of life is reduced from the cycle of births and deaths if we go through the punarjani cave once. 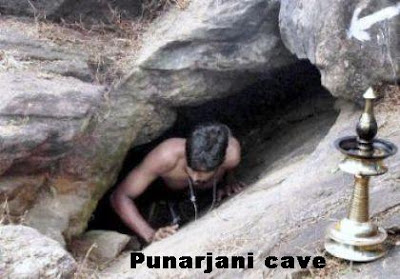 To the north west side of the courtyard is the banyan tree. To circle this tree is very auspicious (arrayal pradakshinam) and to see the lizard in this particular tree is considered as having the darshan of Lord Guruvayoorappan.

Every year thousands of people from far and near come to Bharathappuzha to offer their oblations to their Pitrus espe­cially on the new moon days in the Malayalam month of Karkidakam (June-July) and Thulam (Oct-Nov).

The important annual festival here is Ekadasi. It is a belief that Lord Guruvayurappan will come all the way from Guruvayur and visit Vilwadrinathan on this particular day. Niramala, is another great festival which falls in the month of chingam.The lights and the decoration with flower garlands is one of exquisite beauty. Ramanavami is also celebrated with great splendour.