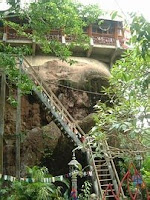 Location : It is a sacred hilltop site 30km from Angkor Wat in Cambodia and a national park of Cambodia. Phnom Kulen is widely regarded as the birthplace of the ancient Khmer Empire and is located some 48km from Siem Reap.Of special religious meaning to Hindus and Buddhists, it was at Phnom Kulen that King Jayavarma II proclaimed independence from Java in 802 A.D.

Special : The site is known for its carvings representing fertility and its waters which hold special significance to Hindus. Just 5cm under the water's surface over 1000 small carvings are etched into the sandstone riverbed. The waters are regarded as holy, given that Jayavarman II chose to bathe in the river, and had the river diverted so that the stone bed could be carved. Carvings include a stone representation of the Hindu god Vishnu laying on his serpent Ananta, with his wife Lakshmi at his feet. A lotus flower protrudes from his navel bearing the god Brahma. The river then ends with a waterfall and a pool.

Linga 1,000 is located on the mountain, along the Siem Reap River and has a lot of figures of Yoni and Linga spreading out at the bottom of the river.

Terrace Of Sdach Kamlung is a plain terrace having a small ruined temple made of solid brick at the middle; the study proves that the terrace covered by lava for hundreds years.

The Khmer Rouge used the location as a final stronghold as their regime came to an end in 1979. Nearby is Preah Ang Thom, a 16th century Buddhist monastery notable for the giant reclining Buddha, the country's largest.