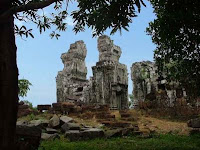 Location : It is a temple in Angkor, the area of Cambodia that was capital of the Khmer Empire.

Built during the reign of King Yasovarman (889-910 AD), the temple stands atop a hill northeast of the East Baray, the huge Angkorian reservoir that is now dry. Phnom Bok is one of three hilltop temples built during the king's reign, the others being Phnom Bakheng and Phnom Krom. The sandstone edifice consists of three main towers.