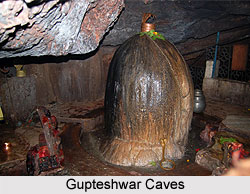 Gupteswar is a shrine of Lord Shiva situated about 55 km away Jeypore, Koraput District in the state of Odisha, India. It is a limestone cave discovered some time ago and has a number of scenic spots around.

According to mythology, the lingam was first discovered by Lord Rama when he was roaming in the then Dandakaranya forest with wife Sita and brother Laxman, and later worshipped it calling it "Gupteswar". The poet Kalidas too, described the scenic beauty of Ramgiri forest where the cave temple is referred to in his famous Meghadutam.

However, with the passing of time, the temple was abandoned. Later, in the last part of the 19th century, a hunter of the Ramgiri area found the lingam. Since then the lingam has been worshipped by the tribes of Koraput region.

The main attraction is the gigantic Shiva Linga which is said to be increasing in size. Pilgrims from all over the country come here during the Sravana period, because the yearly BolBom yatra is held at this place. Devotees walk to the Gupteshwar during BolBom yatra to bathe in the maha kund, and then chant near the Shiva Linga. The cave is more or less like the Bora caves ( India - Odisha and Andhra border ). you have got same feelings in other natural places . But this Gupteswar cave is special for the underground water. It is really worth seeing. It is a natural cave with Stalagmites. One has to reach the end to view the superb scene .
After taking bath in the river Sabari, also known as Pataliganga, devotees offered prayers in the cave temple, situated at a height of 1,000 metres.

Surrounded by a dense forest of sal trees and flanked by the Kolab river, a 2m high lingam stands in the cave. The shrine is called "Gupteswar" which means the "Hidden God". It is so named because it was lying hidden in the cave for a very long period. One can reach it by climbing the 476 steps flanked with rows of champak trees. The entrance of the cave is about 3 m wide and 2 m in height. There are also several other caves nearby. Inside the second cave there is a large stalactite. People worship it as the udder of God Kamadhenu (the divine cow) and wait under it with outstretched palms to collect drops of water which fall only at long intervals.

Popularly known as "Gupta Kedar" in the vicinity, this sacred place, endowed with unusual natural beauty, is associated with Shri Rama of the epic Ramayana. The nearby hill has been named "Ramagiri".  In Shivaratri (a Hindu festival) Gupteswar Temple draws over 200,000 devotees from Odisha, Andhra Pradesh and Chhattisgarh. People suffering from incurable diseases come here to worship the God and remain here for months in the hope of getting cured.

There are five perennial poles of water called Ganga, Yamuna, Saraswati, Bhargavi and Indradyumna. The entrance of the cave looks like two jaws and the Shiva Linga is located at the meeting point of the jaws.
Similarly, thousands of people offer prayers at Paikpada, which is famous for the 9th century Pataleshwar Shiva temple. It is believed that there are 99,99,999 Shiva Lingas (only one less than one crore) in and around the temple.

http://www.orissaspider.com/resources/3523-Holy-Shrine-Lingam-Gupteswar-Koraput.aspx
Posted by Rajesh. CTR at 9:04:00 PM No comments: Links to this post

Mahendragiri, is a mountain peak at in the Paralakhemundi (or Parlakhemundi) subdivision of the district of Gajapati, Orissa, India. It is situated amongst the Eastern Ghats at an elevation of 1,501 meters (4,925 ft).
.
Legend :

Legend says that it is the place where lord Parashurama,a Chiranjeevi staying eternally and doing tapasya.Temples built by Pandavas are seen.Main festival here is Shivaratri,the worship of Shiva,the guru or percepter of lord Parashurama.

It is associated with mythological stories from the Ramayana as Mahendra Parvata (mountain). It is also Known as the Southern Amarnath of Orissa. a ‘Kula Parvata’ along with Malaya, Sahyadri, Parijatra, Shuktiman, Vindhya and Malyavaan

Legend has it that the linga was installed by the Pandavas of the Mahabharata era. Construction of the 8-feet-high temple is also attributed to the Pandavas. The Pandavas are believed to have performed the ritual to worship Gokarneswara at the crack of dawn on Shivaratri before they left the place.Sarala Dasa, the author of Oriya Mahabharata, attributes the establishment of the Gokarnesvara Sivalinga to Pandava brothers who visited Mahendragiri during the period of their exile. 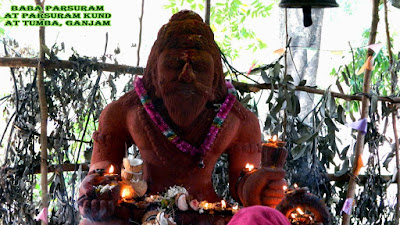 Shivaratri was once more celebrated with pomp ,devotion and gaiety in Gajapati , and the main function was at the famous and historical Mahendragiri Hills .The administration had made elaborate arrangements for the a safe and smooth Shivaratri on the Mahendragiri Hills . More than 50,000 devotees from all parts of the state had reached the footsteps of the Mahendragiri Hills from where they trekked up the hills through the Burkat Pass .Ladies and aged women in large numbers braved the chill and dark night to go up the Mahendragiri Hills to have a glimpse of the Shiva Lingas inside the three temples namely Bhima Temple , Kunti(Gokerneswara) Temple and the Yudhister Temple supposed to have constructed by the Pandavas during their exile . Police in big numbers were present through out the route and also on the mountain top to face any law or order situation . Drinking Water supply , generator run electricity , first aid , food and other arrangements were also efficiently maintained by the Revenue Department who are responsible for this annual function . In the other Shiva Temple of the town devotees had gathered in large numbers to and the temples were also brightly decorated ,coloured and lit up with lights for the occasion.

In the adjoining areas the Raiwalsa Temple near Teakkali , Mina Jhola near Rayagada ,Makhalingam near Hiramandallam ,Putingi near Mandaasa were also the few Shiva Temples where devotees from this place had gone in huge numbers . Early in the morning the Suryo Udyog(sunrise) was the major attraction for the devotees who waited for the first sunrays to break through before returning back home.

There are four other temples, dedicated to Yudhisthira, Bheema, Arjuna and Kunti, on the premises.

The Kunti temple is 30 feet high and is at one end of the flat top the mountain. It is in rekha style without any jagamohanaor plinth. The temple has been plastered with lime after thorough repair. In the side niche are parsvadevatas like Ganesha, Kartikeya and Pravati. The nabagrahas are in the lintel over the door jambs. Two inscriptions which may be paleographically placed in the 12th century A.D. are there, one to the right of the entrance door and the other on the left side of the temple. Some sculptures and dressed stone slabs are lying scattered around the temple.

The Yudhisthira temple rising abruptly from the ground level is in triratha style and is on the other side of the flat top of the mountain. The outer walls are devoid of any sculptural decoration excepting four Chaitya arches. There is no parsvadevata. The lintel of the door contains an inscription of the Chola king Rajendra Chola.

The Bhima temple, assumed by scholar to have been built just after the Gupta period, appears to be the earliest of these temples. It is made of five huge square sized blocks of stones and has low and squat tower, square sanctum, squat sikhara and flat roof. The doorway is narrow and the walls do not have any niche. Upon the last tier of the temple rests the amalakasila but the kalasa is absent. There is no sculptural decoration worth mentioning. This temple is often regarded as the Gokarnesvara temple of the place. In addition to these temples, there are three other huts like uncut stone structures arranged in groups. 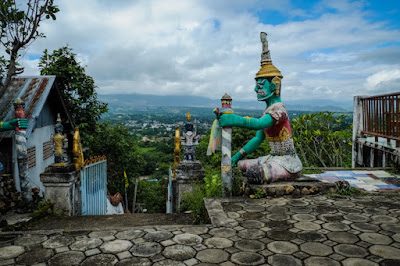 This Temple is located atop a hill in Pai, a small town in Northern Thailand's Mae Hong Son Province. To get there, walk 1km east from the main intersection in town to get to the stairs (353 steps) that lead to the top. Or, if you’ve got wheels, take the 400m sealed road that follows a different route. 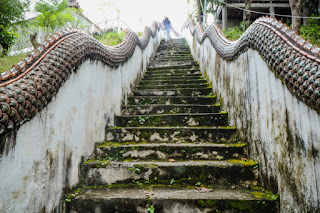 This small temple on a hill 2 km from Pai is especially interesting for its setting and the view overlooking the city you have from it. The 353 steps long staircase to reach the temple is charming even if you can skip it and take the road to access to Wat Phra That Mae Yen. The temple consists of two buildings and a few small golden chedis. 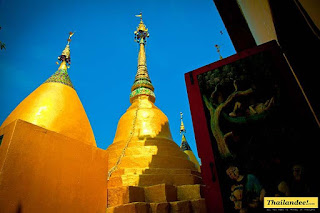 In front of the temple entrance, there is a little market with stalls where you can buy products, mainly hats and scarves knitted by the vendors. They can be very useful because it is cold at night and in the early morning in Pai. There are also two coffee shops. Behind the market, there is another Wihaan housing a reclining Buddha. And over the hill behind it, a large stitting Buddha is under construction and should be visible from far away. If you have the courage and the curiosity, you can already take the small path behind the building of the Reclining Buddha and have a look at the unfinished Big Buddha. Phra That Mae Yen is one of most accessible attraction by bicycle around Pai and a good introduction to your stay in Pai. 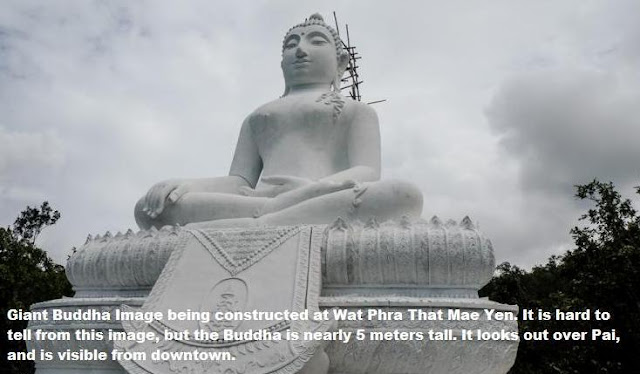 See more at : http://www.thailandee.com/en/visit-thailand/wat-phra-that-mae-yen-pai-161
Copyright © Thailandee.com
This small temple on a hill 2 km from Pai is especially interesting for its setting and the view overlooking the city you have from it. The 353 steps long staircase to reach the temple is charming even if you can skip it and take the road to access to Wat Phra That Mae Yen. The temple consists of two buildings and a few small golden chedis. In front of the temple entrance, there is a little market with stalls where you can buy products, mainly hats and scarves knitted by the vendors. They can be

See more at : http://www.thailandee.com/en/visit-thailand/wat-phra-that-mae-yen-pai-161
Copyright © Thailandee.com
Posted by Rajesh. CTR at 6:06:00 AM No comments: Links to this post