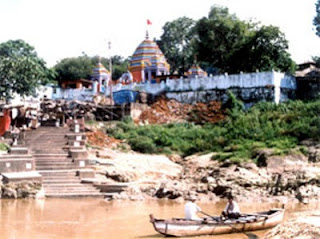 Chhinnamasta temple is located at Rajrappa, 65 km away from Hazaribagh along NH-23 in the Ramgarh district in the North Chotanagpur division division of the state of Jharkhand, India. It is situated on a hillock at the confluence of the Damodar and Bhera (Bhairavi) Rivers near the Rajrappa falls.

Etymology :  Chhinnamasta (Sanskrit: छिन्नमस्ता, Chinnamastā, "She whose head is severed"), often spelled Chinnamasta and also called Chhinnamastika and Prachanda Chandika, is one of the Mahavidyas, ten Tantric goddesses and a ferocious aspect of Devi, the Hindu Divine Mother. Chhinnamasta can be easily identified by her fearsome iconography. The self-decapitated goddess holds her own severed head in one hand, a scimitar in another. Three jets of blood spurt out of her bleeding neck and are drunk by her severed head and two attendants. Chhinnamasta is usually depicted standing on a copulating couple. 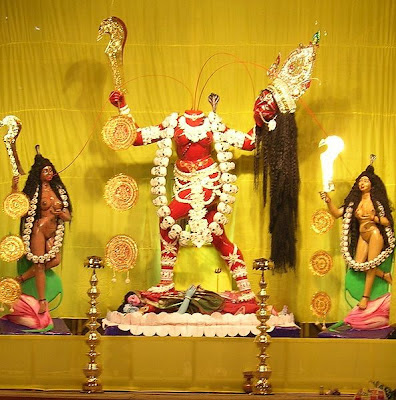 Chinnamasta Temple dedicated to Goddess Chinnamasta is a hindu pilgrimage centre and located in Rajrappa, in Ramgarh district of Jharkhand. The place attracts devotees from all parts of Bihar, Jharkhand and West Bengal. It is located on top of the hill from where Rajrappa Waterfall comes down  forming a 20 feet high waterfall. Boating facilities are available here.

The temple enshrines the Goddess Chinnamasta (the beheaded Goddess Kali), one of the ten forms of the Goddess Durga. The statue shows the goddess holding her own head in her left hand and her head drinking the blood oozing out of her neck. The headless idol of Goddess Chhinnamastika stands on the body of Kamdeo and Rati ( Manmadhan & Rathi ) in Lotus bed. Many smaller temples have been build around the main temple such as the temples of Ashtamatrika and Dakshina Kali. The temples of Mahavidyas built in a series nearby are Tara, Shodashi, Bhubneswari, Bhairavi, Bagla, Kamla, Matangi, Dhumavati.

The temple is very old and the place Rajrappa finds mention in the Vedas, Puranas and Hindu scriptures as a "Shakti Peeth" which is flocked by devotees from Bihar, Jharkhand, West Bengal Assam and Nepal for worship of Goddess Chinnamastika. Vedic book Durga Saptashati also mentions the temple. The art and architectural design resembles the design of temples of Tantrik importance. The temple is considered as notable as the tantrik site of Kamakhya Temple of Assam which has a similar architecture. The temple is one of the 10 Mahavidhyas. The ancient temple of Goddess was destroyed and later a new temple was constructed and the original idol of Goddess was placed in it. Animal sacrifice is still practised in the temple. The sacrificial animals are killed on Tuesdays, Saturdays and during Kali puja.

A large number of pilgrims arrive here throughout the year. Large congregation of people takes place here during the full Moon and New Moon nights. Owing to the religious importance of the place, it is also popular among the disciples for marriage and ritual of Mundan or shaving the head. Vehicle owners come here to get blessings for their new vehicles as they believe that the first worship of vehicles here multiplies the life of vehicles and brings luck to the owners. Tantriks look upon this place for Tantric accomplishment. 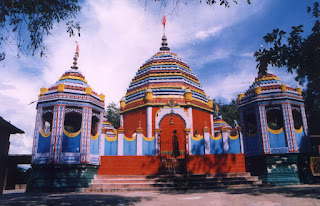 Rajrappa also is a pilgrim centre for the Santals and other tribals who come for immersion of the ashes of their loved ones in the Damodar. They come mostly during the month of December, in groups known as yatri. As per their mythology it is their final resting place. In their folk songs Rajrappa is referred to as "Thel Kopi Ghat" (Water Ghat) and they use oil after bathing. They come in significant numbers from the southern parts of Jharkhand state such as East and West Singhbhum and Saraikela districts. Maa Chinmastika devi is also known as Manokamna devi due to the belief that it fulfils the wishes of the devotees. Devotees tie a red thread around a rock in the temple for the fulfillment of their wishes.

Besides religious importance the place is also a famous picnic spot owing to its natural beauty. Hilly landscape covered with lush forest and river are some of its features. The hot water spring located here increases the beauty of the region. The Bhera River joins the Damodar River from a height of 20 feet creating a waterfall. The location offers boating facilities and visitors enjoy boat rides in the locality having various rock formations along the river bank. The place also attracts many foreign tourists due to its natural and religious importance.

The region around the temple is quite and eerie after sunset. Due to this Satyajit Ray chose Rajrappa as the setting for Feluda adventure Chhinnamastar Abhishap.

http://en.wikipedia.org/wiki/Chhinnamasta
Posted by Rajesh. CTR at 8:06:00 PM No comments: Links to this post