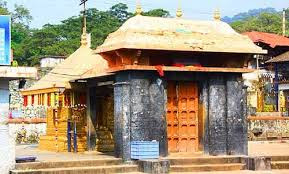 1. The Maalikappuram Temple, is dedicated to Malikappurathamma, the Devi who was dedicated to Ayyappa and wished to marry him. One of the stories about Malikappurathamma is related with the Kalari School, Cheerappanchira .The Pandalam Raja admitted Ayyappa in this school to study Martial arts (Kalari) from the Guru, Kalari Panicker. Leela, his daughter fell in love with the Prince. But being a Brahmachari, Ayyappa couldn’t accept her passion. But he gave her a word that, he will marry her certainly, if there is no Kanni Ayyappas at Sabarimala.

2.  It is said that the Malikappurathamma is Madhura Meenakshi, the Kula Paradevatha of Pandalam Royal Family which has conections with Pandya Dynasty. 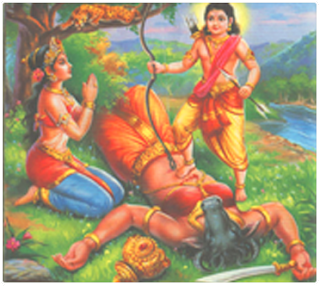 3.  The legend of Malikapurathamma is closely connected to that of Lord Ayyappa. The incarnation of Lord Ayyappa was for the destruction of “Mahishi”, sister of Mahishasura. The Upanishads declare that it is Dharma that sustains the world. Like how Shiva’s son Ganapathy is worshipped as Vignahartha, Shiva’s son Dharmasastha is the ruler and protector of the world. When the Trinity – Brahma, Vishnu and Shiva – took up human form to establish dharma in the world, there emerged from them a Shakti or force which they named Dattatreya. Simultaneously the consorts of the Trinity – Saraswati, Lakshmi, and Parvati – together took birth as the daughter of sage Galava. The sage named her Leela and in due course gave her in marriage to Dattatreya. The couple fulfilled their grahasthasrama for a long time. Later when Dattatreya tried to convince Leela that the purpose of human birth is ‘Self realisation’ she was not ready to accept the same. She challenged him by saying that she being his Patta-mahishi does not accept it. Dattatreya got angry and cursed her to become a Mahishi (She Buffalo) in asuras family. Leela was also enraged and she too cursed her husband to become a Mahisha .

In course of time Leela was born as Mahishi, the daughter of Karambaasura , she had a grouse against Devas for their role in her cousin Mahisasura’s death. Mahishi undertook severe penance and propitiated Lord Brahma and obtained a boon from him that an incarnation born to Hari and Hara can only kill her. Blessed by the boon Mahishi deposed Indra and oppressed the Devas. They turned to the Trinity for redress. Dattatreya was made to take the form of a Buffalo named Sundara Mahisha. Thus Leela’s curse on Dattatreya took effect. Lord Vishnu asked Sundara Mahisha to lure Mahishi and take her down to earth. When Sundara Mahisha went to Deva Loka to fetch Mahishi, she was so enamoured that she forgot herself and all about the revenge, she blindly left her throne and followed Mahisha to earth. To kill Mahishi, Shri Dharmasastha the son of Shiva (Hara) and Mohini (Hari) took an avatar as Manikantan, the foster son of King Rajasekharan of Pandalam kingdom in Kerala. When the Devas prayed to him for achieving the aim of his avatara, Manikantan blessed them and fought Mahishi. Having been blessed with several boons she gave a tough fight to Manikantan who at last caught hold of her horns and killed her. Mahishi fell dead on the banks of the river Alasa (Azhutha) in Kerala. The Devas praised Shree Dharmasastha as Mahishi was killed by him. Lord Shiva came down to the world to witness the destruction of the evil. The place where the body of Mahishi fell is known as Kallidumkunnu and according to some legends the place where Lord Shiva tethered his bull when he came to witness the destruction of Mahishi is now known as Kalaketti.

As the Lord danced on the fallen body of Mahishi, Leela emerged, redeemed from her curse and prayed that she be taken as his consort. The Lord declined her request since he was a bramhachari for the purpose of Dharma Sasan, but agreed that she being the avatar of Saraswati, Laxmi and Parvathi combined would be worshipped at a special shrine. From then onwards she was known as Malikapurthuamma.

After fulfilling the purpose of his avatar, Lord Manikantan agreed to the wishes of King Rajasekharan of Pandalam and agreed to remain at Holly Sabrimala for the purpose of Dharma sasan in the world. Thus two adjacent temples were made by the King at Sabarimala, one for Shree Dharmasastha and the other for Malikapurthuamma.

Maalikapurathamma is the goddess who is worshipped in a subsidiary shrine at Sabarimala Ayyappa Temple. Maalikapurathamma Temple is visited after having darshan of Sabarimala Ayyappa Temple.Malikappurathamma is also called Manchambika and Mancha mathavu (Mancha matha). The value of Bhakthi is reflected in owns own faith and hope. Malikappurathamma teaches this lesson to every devotee who wishes to go to see Lord Ayyappa. After visiting her shrine the devotee should  get awareness of the ultimate fact “ It’s You” (Tatwamasi) ( self realisation )

The temple complex houses the shrines of the Devi and Kaduthaswamy and also the the shrines of the snake god, Nagaraja and goddess, Nagayakshi. On the way to the temple, there is a temple tank called as Bhasma Kulam where the devotees can take a holy bath in memory of the tapaswini Sabari, who had committed her mortal life by entering the fire. After this incident the hill was named Sabarimala.

Offerings : Of the two coconuts in the "Pin Kettu" of the Irumudi kettu, One is broken at the Pampa River and another coconut is to offer to the Malikapurathamma.The turmeric powder in the Irumudi kettu is also offered to the Malikapurathamma. Here coconuts are offered only after rolling them on the ground. Other main offerings to Goddess Malikapurathu Amma are Saffron powder (Kumkumam podi), Manjal podi (Turmeric powder), Plantain (Kadali Pazham), Jhagri (Sharkara), red silk and Honey. The other main rituals at Maalikappuram temple are Pattudayada, Pottu, Chandu, Kanmashi, Vala and Bhagavati Seva.

Festivals :
Malikappuram Ezhunnelathu (Malikappuram Procession)
Beginning with Makara Vilakku festival, Malikapurathamma leaves her shrine on three successive nights to inspect if the time has come for Ayyappan to fulfill his promise. A procession from the Malikapurathamma temple goes to Sharamkutti, where the first-time pilgrims leave an arrow to announce their presence. Every year, a crestfallen Malikapurathamma returns to continue her eternal wait. The idol of the Devi will be carried on the back of a caparisoned elephant with traditional music including pandy melam. The same procession will return to Malikappuram in a silent manner which symbolizes the grief of Devi who sees thousands of arrows at Saramkuthy.

https://en.wikipedia.org/wiki/Maalikapurathamma
Posted by Rajesh. CTR at 8:19:00 PM No comments: