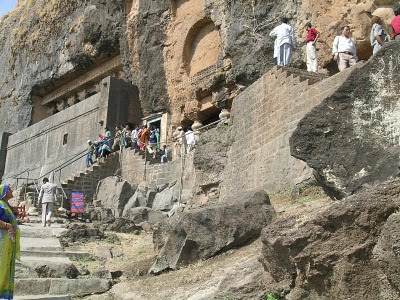 With a desire of having Vinayak as her son, Parvati performed penance for 12 years in the caves of Lenyadri. Ganapati was pleased and gave her the boon she wanted . On one Bhadrapada Shudh Chaturthi, Parvati scrapped the scraf from her body, mixed it with oil and ointment and formed an idol of Ganesh. She was performing pooja of that idol, suddenly the idol became alive and told Parvati that as desired by her he has taken Avatar in her house. On 11th day he was named Ganesh meaning a person who keeps three qualities Satva, Raja and Tama under control. Lord Shiv Shankar gave him boon that whosoever remembers Ganesh before starting a work, will successfully complete the work. Ganesh grew up for 15 years at Lenyadri. Demon king Sindhu who knew that his death is in the hands of Ganesh, sent demons like Krur, Balasur, Vyomasur, Kshemma, Kushal etc. to kill Ganesh on Lenyadri. Instead Ganesh killed all these demons in his childhood. Ganapati also performed many Balleelas in this place. Hence Lenyadri is considered holy place .

Coming back to the story of Girijatmaj or Ganesa, Parvati requested Marichi Rishi to find a way out to protect Ganesa from demons. Marichi asked why it would be necessary to protect Ganapati, whose Namasmarana (remembering the name) itself destroys all obstacles. Still to satisfy Parvati he taught her Ganesa Kavacha and said that if any child had fear of Rakshasas or Pishachas this kaacha may be tied around his neck. At the age of six, Vishwakarma worshipped Ganesa and endowed him with Paasa [noose], Parasu[axe], Ankusa[hook] and Kamala[lotus]. At the age of seven, his Upanayana was performed by sages like Gautama.

At the age of ten, a demon called Kamalasur came with an army twelve crore strong and had war with Ganesa, who was mounted on a peacock. The demons' army was defeated. From Kamalasur's blood many more demons were created. Siddhi and Buddhi ate away all demons. Al last Kamalasur was cut into two pieces with Ganesa’s Trishul. The place where the head of Kamalasura was thrown is the Morgaon Kshetra. Vishwakarma constructed a city and a temple in that place.
Then Shankar, Parvati and Ganesa started towards Gandaki city where the gods were imprisoned. First as a matter of courtesy Nandi was sent to meet demon Sindhu to ask him to release the gods. Sindhu refused and war ensued. Nandi, Veerabhadra, Kartikeya and other Shiva Ganas fought with the demons. On the second day his two brothers-in-law Kala and Vikala were killed and on the third day his sons Dharma and Adharma were destroyed by Kartikeya. Sindhu's father Chakrapani advised him to release the gods. But he refused. He came running towards Mayureshwara with his sword held high. Suddenly Ganesa took a small form, got down from the peacock and sent an arrow which pierced Sindhu's navel and broke it. Out came the nectar given by Surya to Sindhu. Sindhu fell dead.

Ganesa was seated on the Simhasana by Chakrapani and all gods. Brahma's daughters, Siddhi and Buddhi were married to him. Ganesa lived there for many years. After that he took leave of everybody and disappeared. Before doing so he gave his peacock to Kartikeya.

Whoever hears the story of Mayureshwar has all his desires fulfilled. His wealth and fame increases.

The Story of Mayuresa and Girijatmaja are vividly described in Genesa Purana Kreeda Khanda from 73 to 126.

Girijatmaj is the sixth Lord Ganesh Temple to be visited on the Ashta Vinayaka Mandir Pilgrimage. It is the only temple of the Ashtavinayaka which is on a mountain and is built in the locale of Buddhist CaveTemples . Here, Lord Ganesh is worshipped as Girijatmaja. 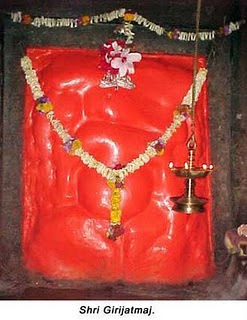 The idol faces north with its trunk to the left, and has to be worshipped from the rear of the temple. The temple faces south. This idol seems to be little different from the rest of the Ashtavinayak idols in a sense that it appears to be not very well designed or carved like the other idols. This idol can be worshipped by anyone. There is no electric bulb in the temple. The temple is constructed such that during the day it is always lighted up by the sun-rays! This place is referred as Jirnapur or Lekhan Parbat in Ganesh Puran.

Lenyadri Temple, located on hill top, is approached after climbing 307 steps. Out of 18 Buddhist caves on mountain, Girijatmaj Vinayak's Temple is in the 8th cave. These caves are also known as Ganesh Gufa. The temple is built out of a single rock and is Dakshinabhimukh- facing south. The Sabhamandap (temple hall) has 18 Overees (small rooms for meditation) within it. The idol of Girijatmaj Ganesh is in one of the rooms. Lord Ganesh’s image is a fresco carved out into a rock, with his head turned to the left. Devotees can enter the Garbhagriha and offer their worship. A river flowing nearby adds beauty to the temple. All the 30 Lenyadri Caves including the Girijatmaj Vinayak Temple is under the control of the Archaeological Survey of India.

The Panchamrit puja is conducted daily in the morning. Major celebrations are held during the Bhadrapad (August – September) and Magh Chaturthis. In the month of Magh, an Akhand Harinaam Saptah is held. Ganesh Jayanti and Ganesha Chaturthi is celebrated in a great manner with cultural programs. Bullock cart racing is organized on this occasion.

Lenyadri is about 94 km from Pune, on Pune - Nasik Highway and Junnar is the nearby town, which is 5 km from Lenyadri. State transport buses ply to Junnar from Pune and from Mumbai. From Junnar, rickshaws, jeeps and buses are available to Lenyadri. Palanquins are available for the devotees to reach the temple on hill top. 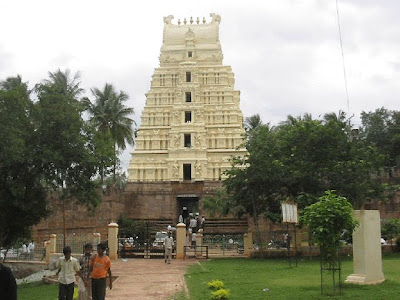 Legends : There are many Legends associated with this temple

1) When Kumar Kartikeya(Lord Murugan) returned to Kailash after completing his trip around the earth, he heard about Ganesha’s marriage from Narada. This angered him. In spite of being restrained by his parents, he touched their feet in obeisance and left for Krounch Mountain. Parvati was very distraught at having to be away from her son, implored Lord Shiva to look for their son. Together, they went to Kumara. But, Kumara went away a further three Yojanas, after learning about his parents coming after him to Krouncha Mountain. Before embarking on a further search for their son on each mountain, they decided to leave a light on every mountain they visited. From that day, that place came to be known as JyotirLinga Mallikarjuna. It is believed that Shiva and Parvati visit this palce on Amavasya (No moon day) and (full Moon day) Pournami, respectively. Visiting this JyotirLinga not only blesses one with innumerable wealth, but also name and fame and fulfils all the desires.

2) Once, a princess named Chandravati decided to go to the Jungles to do penance and meditation. She chose Kadali Vana for this purpose. One day, she witnessed a miracle. A Kapila cow was standing under a Bilwa tree and milk was flowing from all of its four udders, sinking into the ground. The cow kept doing this as a routine chore everyday. Chandravati dug up that area and was dumb founded at what she saw. There was a self-raising Swyambhu SivaLinga. It was bright and shining like the sun rays, and looked like it was burning, throwing flames in all directions. Chandravati prayed to Siva in this JyotirLinga. She built a huge Shiva Temple there. Lord Shankara was very pleased with her. Chandravati went to Kailash wind borne. She received salvation and Mukti. On one of the stone-inscriptions of the temple, Chandravati’s story can be seen carved out.

3) Sage Bringi (Chennai’s Parangi malai is named only after him) once came in pradhikshnam around Shiva neglecting Paravathi Devi in the form of a bee. She got angry and cursed him first but later blessed him at the behest of Shiva. Devi is called Brhmarambigai since She blessed Bringi (Brahmaram means bee). It is said that one can hear the buzzing sound of bee in a hole behind the Sanctum of Ambal (we came to know about it only later and so could not check it out).

4) Ramar installed a lingam here, after killing Ravana during the Dhretha yuga
Panadavas installed a lingam here after finishing their 12 years of stay at forests during the Dhwabara yuga
Aadhi Sankarar, Nagarjunacharyar, Chathrapathi Shivaji, Krishna deva raya visited during this kali yuga; Shivaji stayed here for some time, worshipped Brahmarambigai and constructed one of the towers, Uthara Gopura, also called, the Shivaji Gopuram

5) Parvatha, son of Silada Maharshi is said to have performed penance, pleased Siva and made him agree to live on his body. This Parvatha assumed the shape of big Hill - Sriparvatha and Siva lived on it’s top as Mallikarjuna Swamy.

The shrine of Lord Mallikarjuna situated picturesqely on a flat top of Nallamalai Hills, Srisailam is reputed to be one of the most ancient Kshetras in India.

Shaila Mallikarjuna’s holy place is located on the banks of River Krishna. Here River Krishna is in the form of Patalaganga (underground spring). Lakhs of devotees take a holy dip here and then go for the Darshan of the JyotirLinga. 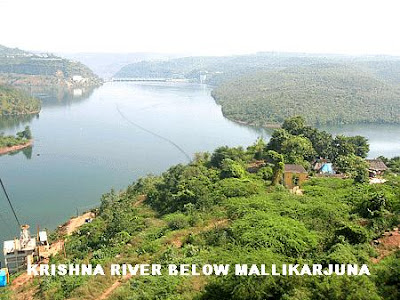 Earlier, this part of the Shaila mountains was an unreachable tough terrain and fraught with danger. Even then, devotees, with their sheer will power, used to reach there in large numbers. Hiranyakashipa, Narada, Pandavas, Sri Ram are some of the great mythological personalities who have visited this holy shrine. shankara bhagavatpAda, rENukAchArya(1), akka mahAdevi, hemareddy mallamma are some of the great devotees who worshipped Lord mallikArjuna here.

It is said that Shiva told Paravathi that He considers SriSailam as his most favourite place, more than Kailasam, and the place reflects His full power