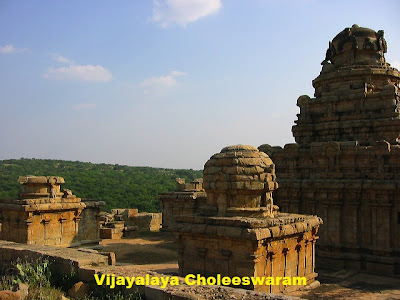 Narthamalai is a cluster of small hills, is  36 km south of Trichi and 17 km north of Pudukkottai on the Trichi-Karaikkudi rail link in the state of Tamil Nadu, India. The temple complex is located on a gently sloping rock, the path winding through shrub jungle. The temple proper can be approached only by ascending the gently sloping hill for a distance of 0.5 km.

Narthamalai is the modern corrupt form of its earlier more famous name "Nagarattar Malai" in the early mediaeval era when the hills were frequented by Jaina ascetics and the habitat was a flourishing traders' settlemnt of international repute in contrast to the sleepy village of today. The area was ruled by Muttaraiyars, vassals of the Pallava monrachs of Kanchipuram.

Now an archaeological monument, here one can see some of the oldest rock cut cave temples, as well as the longest rock-cut edicts, similar to Asokan edicts and extremely rare in the south of India. The two rock-cut temples are classic examples of how temple architecture styles were fusing in different parts of the country.

Two cave temples and an early structural temple dating back in time to the early mediaeval era. Once a Jaina abode, the place was later taken over by Hindus. Scenically and strategically selected site offers a vast view of the plains below. The older cave temple houses one of the very beautiful lifesize portrayal of Vishnu.

The Pudukottai district in Tamil Nadu, houses numerous sites of Budhist and Jaina centres of yore.

It is surrounded by seven or eight hills with ancient caves containing Jaina Architectural remnants. The Western hill is the most important among these. 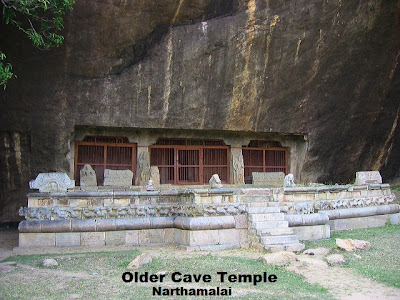 There are two cave temples facing east and a later structural temple complex, Vijayalaya Choleeswaram, facing the caves. The larger and earlier Jaina cave on the north side has been converted later as a Vaishnava shrine and its ardhamandapa has about 12 standing friezes of Vishnu.

Outside the Vishnu graham (the older cave temple) is a large mukhamandapa (adhistana only) wherein the Sapta Matrukkal (seven divine mothers) are located in two congregations. A granite block of three depicting Kaumari, Brahmi and Maheswari is stationed on the south side of the entrance to the shrine, while a group of four Vaishnavi, Varahi, Indrani and Chamunda occupy the northern side of the entrance. In addition, a dvarapala and a Vinadhara Dakshinamurty can be seen on the south side of the entrance and another dvarapala on the right side. An unidentified large sculpture (Durga) occupies the extreme southern slot.

On the south side of the original Jain cave, another cave shrine has been carved out in the rock. This temple is called "Paliyili Isvaram". On the kumudha of the mukhamandapa (foundation) of this temple is recorded a Pallava inscription of 862 A.D. in the seventh regnal year of Nrpatunga Varman. It proclaims that Sattan Paliyili, son of Videl Vidugu Muttaraiyar (the subordinate chieftain of the Pallava ruling over Narthamalai) constructed (altered the Jaina one) the cave temple for Siva and his wife Paliyili Siriya Nangai constructed the mukhamandapa (adhistana only), Rishabha, Balipeeta etc.

On the east of the above two cave temples, in a vast expanse of gently rolling rock is located the "Vijayalaya Choleeswaram", the early structural temple of the period of Vijayalaya, the founder of the Chola dynasty. A Pandyan inscription of (1228 A.D.) Ko Maravarman Sundara Pandya Deva near the Jaina Cave on the rock details the privsions made for festivals, processions, Thiru Veethi Kuttu etc. for the Vijayalay Choleesvaram Udaiya Nayanar, the deity of the temple. There is also another fragmentary inscription of 1015 A.D. in the reign of Rajendra Deva I.

The temple faces west and has the unusual arrangement of a circular cella (the omkara garbhagriha) within a square prakara. Above the cella and the prakara rises the vimana in four diminishing storeys (talas) of which the three lower ones are square and the uppermost circular, the whole surmounted by a dome shaped sikhara with a round kalasa on top. There is an enclosed mantapa in front with Pallava style pillars. Two dvarapalas, five feet tall, guard the entrance.

An epigraph obtained below the dvarapala on the north states that the temple was renovated by Muttaraiyan Mallan Vituman over the earlier weather-withered structure built by Muttaraiyan Ilangovadi. Thus it becomes clear that the original shrine was a Pallava foundation of eighth century during the rule of Nandivarman and the rebuilt stone structure (Kal tali) belonged to the period of Vijayalaya Chola in the latter half of 9th century.

Round the main temple in the open yard are seven small sub-shrines built of stone and all facing inwards in a typical early Chola style. Beautiful sculptures of Uma Sahithar and Vina Dhara Dakshinamurty belonging to the deva koshta on the griva of the main temple are now the Pudukkottai Museum.

The entire complex is now an archaeological monument.