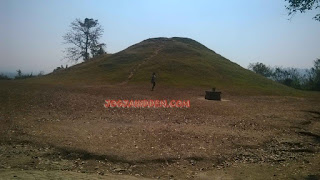 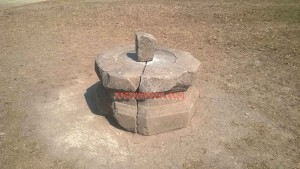 Local people still exist who believe, Temple Abang maintained a prominent and respected elder. He named Kyai Butcher, who has a great body and long hair.

Kyai Butcher is the protector of all the damage. In the days of Japan, residents often take refuge in the temple, because there is a belief. Kyai Butcher will protect them. Belief in very large Kyai Butcher. Thus, there is a story about a lump of gold as big as calves are believed to exist in the body temple brother, still living the story and no one dared to prove it.

Quite apart from all the stories, each place (one temple) has its own story among citizens. Such Candi Abang always associated with terpedam treasure story, or several stories about the place looking pesugihan. There are mythical stories of local residents ever tell me about Temple Abang, for example, why on top of the temple mound Abang no large plants growing? Why just grass? Because if you study the History of Java-owned Raffles, some temples are found even in conditions of "gripped" by the roots of large plants. Then why in the Temple Abang even no plants are "gripped"?

Abang (means Red in Javanese ) temple is classified into Hindu temple. The name "Abang" is derived from the color of the temple building material. The location of this temple is nearby some other temples like Banyunibo temple and Barong temple. It is estimated that the temple was built around 9th and 10th century during the time of Ancient Mataram Kingdom. Even so, this temple is said to have younger age compare to other Hindu temple found in Yogyakarta.

Abang temple is located above the hill. Do not expect to see a temple with complete construction as in Prambanan or Boko. The temple is only a small temple shaped like a mound of land. The shape will remind you of a dome house or if you familiar, Teletubbies house. Before getting to the temple, you will have to pass rocky and inclining road. Nevertheless, the view of the teak forest will tease your eyes to look around and even take photograph. The temple is made of brick which has red color. That is why the temple is called abang, a Javanese word which means “red.” However, the temple is covered with grass during rainy season. The red color will appear only when the dry season comes. The red color of the temple is what makes it unique. The temples found in Central Java are usually made of andesite stones. Meanwhile this temple made of red stones, which is similar like temples found in the East Java.

The temple sizes a 36×34 base and shaped like pyramid. The height of the temple is not yet known. Firstly found, the temple has statue and octagonal yoni-base, as a marker that the temple is a Hindu heritage.

In the middle part is an entrance stair made of limestone. Some people thought there is a treasure hidden in the temple. They tried to dig the treasure but they ruin the temple. Nowadays, the real temple still cannot be seen. However, the surrounding of the temple presents a beautiful view of a wide green landscape. The temple area is famous among bikers community. They often riding bicycle together and visit this temple. When visiting the temple, you can also visit another historical site nearby. You can stop by at Sentono cave before climbing the hill to the temple. Your trip will be more fun if you use bike instead of other vehicles. During your biking trip, you can visit other temples nearby or simply passing through the villages with rice field view. Cave 1 : There is Lingga Yoni Carved together with cave floor inside this cave. There are relieves of Durga Mahisasurawardhini and Mahakala in northern wall, also there is relief of Agastya and Nandiswara in southern wall. The relief are broken, especially on the part of face and hand. There is a painting of man sitting at the square statue base and tendrils, painted in black paint. 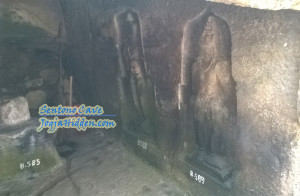 Cave 2 :  The reliefs of three statues carved in cave wall. Statue in the middle has sitting position on top of a square pedestal Dharmacakramudra hand gesture, while the two statues are located on left side of it standing with attitude Tribangga. In front of the statue which is in the middle position are Lingga Yoni. On top of the front on cave there is rectangular hole length: 50cm, width: 30cm, depth: 13cm. This hole may serve as a reservoir of water at Lingga Yoni worship. 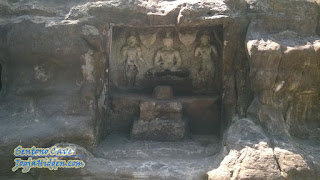 Cave 3 :  In third cave there is relief that not been completed already. This relief may describe of a tortoise. In the middle of floor of cave there is a square-shaped hole length: 53cm, width: 50cm and depth: 12cm. Probably this hole used to put object of veneration.

It is suggested to go there by motorcycle or bike due to the rocky terrain.
There is no parking lot available, but you can park your motorcycle at the villagers’ house.
Do not leave your vehicle unattended because your stuff might get stolen.

By public transport: Take Trans Jogja route 1A or 1B and get off at Prambanan shelter. Continue by taking bus route Yogya-Piyungan and get off at Bercak village. Continue by walking for about 1 Km toward Karongan village. The temple is located above the hill on the northern part of this village.
By private vehicle: Take the route to Prambanan temple and turn right at the traffic light junction right before Prambanan temple (route to Ratu Boko). Keep heading south for about 8 Km and pay attention to the road sign showing direction to Abang temple.

http://jogjahidden.com/sentono-cave-the-hidden-cultural-heritage-in-yogyakarta/
Posted by Rajesh. CTR at 6:38:00 AM No comments: Links to this post