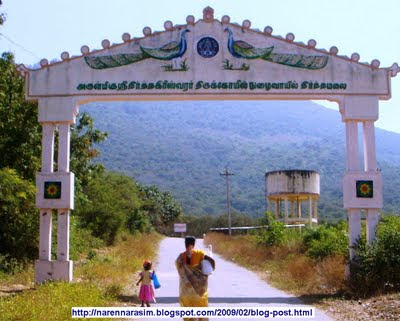 Location : It is located 60Kms from Dharmapuri on the way to Thiruvannamalai via Aroor.

This Shiva hill temple is 500meters high. It is a very old shrine and the inscriptions on this temple says Chola emperors had regularly visited theis temple including Rajendra Cholan. 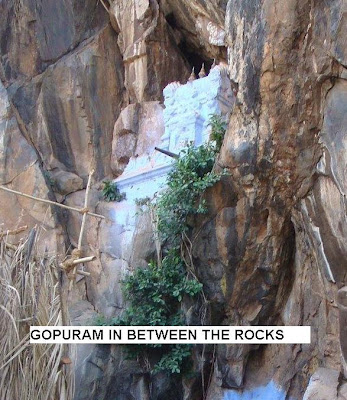 It was said in old puranas that Lord Rama had worshiped Shiva in two places during his Ramavathar. One is Rameshwaram and other Theertha malai. Hence there is belief that a holy dip in the waters of this spring will wipe out the sins committed by the people.

In order to worship to Lord Shiva, Rama sent Hanuman to fetch water from the River Ganga, but when Hanuman did not return at the appointed time for pooja, Rama unleashed an arrow onto the rocky slope of the hillock and water sprang forth, which today is called Rama Theertham.

This pilgrim and picnic centre becoming very popular with the public. The temple situated about one k.m up the steep slope of a hillock derives that its name from the five springs in the temple.

The tiny waterfall drops from a height of about 30 feet is perennial and during the summer as well as the rainy season the water falls on the bathing ghat behind the sanctum sanctorum of the temple. The other Theertham, all of which have their origin in different parts of the rocky surface, are the Agasthya Theertham, AgniTheertham. Kumara Theertham and the Gouri Theertham, besides these four Theerthams the Hanuman Theertham is situated about 16km from the main temple on the banks of river South Pennar. This too is also closely associated with the temple. It is stated that when Hanuman returned with the water from the Ganga, he found that Rama had brought the Ganga water with his arrow. He then threw away in anger the vessel containing the Ganga water. This water fell onto the riverbank.

Hanuman Theertham also is a very holy place. During summer even when the river is dry there will be sweet water in the spring that flows from rock in the riverbed. The waters of the Theerthamalai are supposed to have medicinal values too. It may be mentioned that Theerthamalai has huge reserves of magnetite iron ore that can be utilized for the Salem Steel Plant.

Several Inscriptions can be found in the Theerthagireeswarar Temple. They relate to the Vijayanagar and Chola rulers. There is one inscription in ancient Telugu and Kannada. Poet Saint Arunagirinathar referred to the Temple of Theerthagirieeswarar in his compositions. The Mandapam near the sanctum sanctorum is supposed to be built by Sila Naicken. He is said to have maintained a well-fortified garrison at the top of the hill from where a commanding view of the surroundings can be on all sides is available.

There is another spring known as Vashista Theertham higher up in the hill. Close by are the wonderful granite pieces of Saptha kanyakas. The beauty of these sculptures is that they can be viewed only through a very narrow crevice in the rock. The nine-day annual festival at the Temple is in the month of March.

Another theertham (Hanuman Theertham) is on the way from Aroor to Oothangarai. it is belief that we should first go to Hanuman theertham and then go to Theertha malai to get full blessings of Theerthangeshwarar. 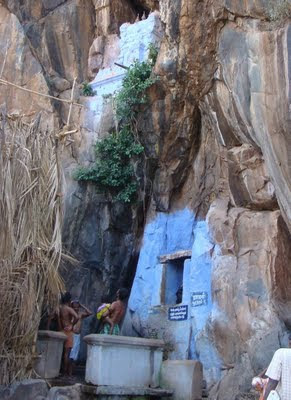 The theertham on the hill comes from a high point and it is perennial whole year. Also pilgrims get full freshness in body and mind aftre having a bath in this theertham.