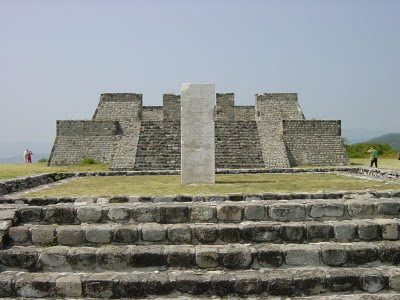 Name : Xochicalco. The name "Xochicalco" means "in the house of Flowers" in the Nahuatl language.
Location : In the western part of the Mexican state of Morelos. The site is located 38 km southwest of Cuernavaca, about 76 miles by road from Mexico City.

The site is open to visitors all week, from 10am to 5pm, although access to the observatory is only allowed after noon. The apogee of Xochicalco came after the fall of Teotihuacan and it has been speculated that Xochicalco played a part in the fall of the Teotihuacano empire.

The architecture and iconography shows affinities with Teotihuacan, the Maya area, and the Matlatzinca culture of the Toluca Valley. Today some residents of the villages closest to the ruins of Xochicalco such as Cuentepec and Tetlama in eastern Morelos speak Nahuatl.

The main ceremonial center is atop an artificially leveled hill, with remains of residential structures, mostly unexcavated, on long terraces covering the slopes.

Of special interest are sculptured reliefs on the sides of some buildings. The Temple of the Feathered Serpent has fine stylized depictions of that deity in a style which includes apparent influences of Teotihuacan and Maya art. It has been speculated that Xochicalco may have had a community of artists from other parts of Mesoamerica.

Other monuments at the site include several other step-pyramid temples, palaces, three ballcourts, sweat-baths, an unusual row of circular altars, and a cave with steps carved down into it. The site also has some free-standing sculptured stelae; others were removed from their original location and are now on display in the INAH museum in Mexico City and at the site museum.

Xochicalco is a UNESCO World Heritage Site and a tourist destination.

A Prehispanic roadway that leads to a temple built atop Coatzin Hill, in Xochicalco is being explored by archaeologists from the National Institute of Anthropology and History (INAH). The study of the nearly 240 meters-long ceremonial road broadens the research area of the site located in the Mexican state of Morelos. 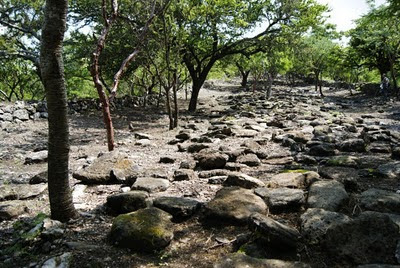 Labors began clearing the way in July 2010, thanks to the 1 million MXP inversion provided by the Temporary Employment Program (PET) developed by INAH and the Social Development Secretariat (SEDESOL). The ancient paved roadway that leads to the top of La Bodega or Coatzin Hill, to the east of the monumental Prehispanic city of Xochicalco was cleaned from weed. An unexcavated temple is found there, with features similar to those of the Feathered Serpent Pyramid.

Other contribution to the study of this peripheral area, as said by the archaeologist, is that “we have more elements to affirm the hypotheses of Quetzalcoatl being the most important deity of the site; some specialists affirm it was Tlaloc and other that it was Quetzalcoatl”.

The temple yet to be excavated was dedicated to Quetzalcoatl is the highest and it is located at 1,325 meters above the sea level; it had a panoramic view of the site and was a protective space as well, having walls and moats that guarded it, he detailed.

Other element of the non-excavated construction that supports the hypothesis of Xochicalco being dedicated to Quetzalcoatl is the east-west orientation of the roadway and the temple atop.