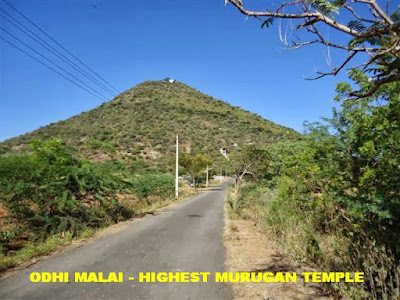 The Sri Kumara Subramanyar temple is situated at Odhi malai (hill) near Sirumugai, Mettupaalayam, Kovai.
Bus: Mini Bus from Puliam Patti & Bus from Mettupalayam to Puliam Patti Town Buses and Private bus. Bus stop Name is “Irumbarai”. There are buses from Kovai, Mettupalayam, Tiruppur and Avinasi to Annur. Kovai to Annur is around 35kms. Odhimali is situated around 16kms from Annur.

1. Why the hill is known as "Odhi Malai" ?
There is a belief that Lord Muruga revealed, recited (odhinaar) the meaning of the Pranavam "OM" to his father Lord Siva on this hill & hence the name "Odhi Malai". Among the arupadai veedus of Muruga, Swamimalai is said to be the sthalam where Lord Muruga revealed the meaning of Pranavam to his father. But, there are locations near Odhimalai, which makes the locals believe this story.

2. Once Lord Brahma, the God of Creation walked past Lord Muruga without greeting him. The angered Muruga wanted to teach Brahma a lesson & asked him to tell him the secret of Creation & when Brahma answered that the Pranavam "OM" was the basis for all creation, Muruga asked him to explain the meaning of "OM". The angry Muruga gave a knock on Brahma's head & put him in a prison at Irumbarai. Irumbarai is about 3kms from Odhimalai. (Irumbu + arai means an iron room). Lord Siva pacified Muruga & released Brahma from the prison. There is a temple for Lord Siva at Irumbarai, where He gives darshan as Kailasanathar.

The reason for the 5 faces & 8 arms :
Originally Lord Muruga at Odhimalai is said to have had 6 faces & 12 arms. Bhogar, one of the 18 siddhars was performing yagna at a location about 1 km from Odhimalai. Lord Muruga gave darshan to Bhogar after he had completed three yagas. Bhogar wanted to reach Pazhani but was not sure of the way. Muruga took a form with one face & four arms and led Bhogar towards Pazhani. He stopped at a place about 4kms from Odhimalai & gave further directions to Bhogar to reach Pazhani and vanished from the scene. This location is Kumaarapaalayam. The Murugar idol in this temple at Kumarapalayam is seen with 1 face & 4 arms. And the Lord resides at Odhimalai with the remaining 5 faces & eight arms. 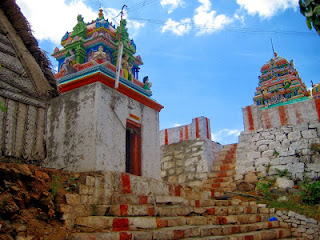 Lord Muruga is said to reside on hills and it is believed that this hill is the highest of all Murugan Temples. The Lord gives darshan with 5 faces and eight arms. The five faces indicate that he is identical with Siva. The Lord of this temple is hence also known as Sivakumaran and Kumarasivam.

There are around 1,880 steps to reach the temple situated on the hill. Vehicles cannot go up to the temple. Along the way is a sannadhi for Lord Ganesha. There are also separate sannadhis for Naagar, Idumban, Viswanathar, Visalakshi, Rajarajeswari, Sapthamathas. Lord Muruga gives darshan in standing posture with 5 faces & 8 arms facing east. Since Muruga of this temple is a young lad before the Soorasamharam, the vahanam behind the idol is considered to be Indran in the form of the peacock. (After the Soorasamharam, Lord Muruga transformed a portion of Suran into his vahanam, the peacock and another portion into the cock on his flag.) He has one foot forward, as if he is ready to rush to assist his devotees. The right lower arm is in abhaya mudra & the left lower arm is in varada mudra. In his right upper arms he holds the sword, arrow and vajram. In this left upper arms he holds the shield, bow and paasam. 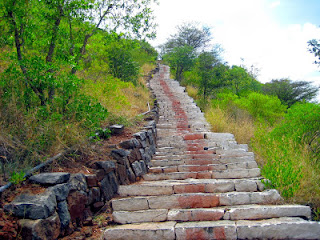 For every 300 steps there is a resting mandapam till 850steps. After that there is no resting place till the temple. There is another hill by the name Odhi malai near Sholingar. The Odhimalai mentioned by Arunagirinathar in his Thirupugazh is the hill - Gnanamalai near Sholingar.

The temple is open for darshan only on Mondays, Fridays, full moon & new moon days, Krithigai and on other special pooja days.