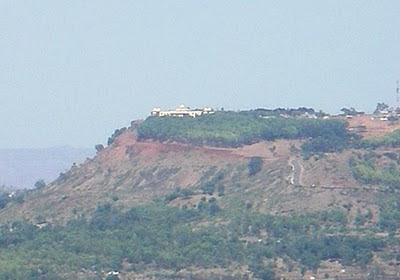 Location :
Jyotiba Temple is located 14 km north-west of Kolhapur in the Panhala Range, in Maharashtra. It is situated at an altitude of 3124 ft above the sea level.

This temple is one of the 12 Jyotirlingas. This is also called Kedarnath and Wadi Ratnagiri. Mythology says, Jotiba helped Mahalaxmi in her fight with the demons. He founded his kingdom on this mountain. He belongs to the Nath cult. He was born in the hands of Vimalmbuja, the wife of the sage Pougand, on Chaitra Shukla 6. This God is avtaar of Guard (Bhairav).

The temple is dedicated to Jyotiba (also Dattatreya), which was formed by the amalgamation of the jyotis (souls) of three gods - Lord Brahma, Lord Vishnu and Lord Shiva. Legend has it that the three gods took the form of Jyotiba to destroy the evil Ratnasur who troubled civilians.
With this incidence name of village was Wadi Ratnagiri. Instead of taking such long name public accepted this place as the name of God ‘Jotiba’ and this name became famous.

The original temple was built in 1730 by Navajisaya. The interior is ancient and the idol is four-handed. There are other temples and Light-towers. Decorated bamboo sticks called as SASAN KATHI are attraction of this fair. Not less than 2000 sticks are traditionally involved in fair. Sequence of these sticks is a convention. It is not changeable. A colorful procession of SASAN KATHI is main attraction of fair. Devotees from abroad and various parts of country take part in this procession.

On Chaitra Poornima (appr. In Mar-Apr.) a big fair is held, when lacs of devotees come with tall (Sasan) sticks. Due to scattering of 'Gulal' the whole mountain is turned pink.

Sunday is a preferable visiting day. On the full moon day a Palkhi procession is carried out.

There is other temple of goddess ‘Yamai’ on the northern part of hill. She is believed to be sister of Jotiba.