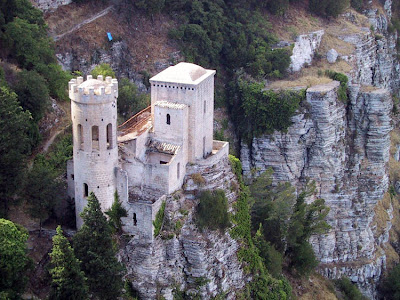 Perched just above 750 metres above sea level on Mountain Erice in Sicily(Italy). Erice is a charming town in the province of Trapani, the low western coast towards Marsala, the dramatic Punta del Saraceno and Capo san Vito to the north-east.

How to get there :

From Trapani there are regular buses to Erice. If you decide to drive down by car it take about it takes about an hour’s journey from Palermo and about thirty five minutes from Trapani. 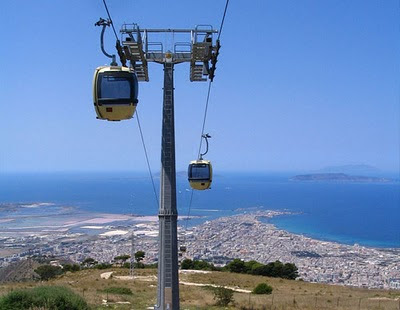 However the most exciting and thrilling way to reach Erice is by Funivia or cable car. You can travel via the station in the Casa Santa valley. The cable car links Trapani to Erice through a picturesque and exciting ride of 3099m. Each individual motorized cable car can take eight passengers. A return trip can also be organized.

Eryx (meaning Mountain) or Erice, as it is more commonly referred to, was a religious centre where the Phoenicians worshipped Astarte, the Greeks worshipped Aphrodite and the Romans worshipped Venus. Today Christians still practice their faith and revere the Virgin Mary in the main church Chiesa Matrice which is dedicated to her.

On the summit of the mountain, there proudly stood an ancient temple of Venus or Aphrodite, founded by Aeneas. According to legend this is how Venus derived her surname name as many Latin writers refer to her as Venus Erycina.

Another legend, mainly attributed to the Greek historian Diodorus speaks of the town being named after Eryx the son of Aphrodite and Butes. Legend says that he invited Hercules to this ancient town in Sicily but was finally vanquished by him. Whatever the legend Erice is a historical town.

Erice was called Gebel Hamed by the Arabs and the Arabian influence is still a part of Erice especially its food. Erice was also invaded by the Normans who called it Monte San Guiliano. They built their famous Norman Castle on top of the ancient Temple of Venus, where Venus Ericina was idolize. In 1934 the town reclaimed its ancient name of Erice.

According to legend, the temple was established by Aeneas. It was well known throughout the Mediterranean area in the ancient age, and an important cult was celebrated in it. In his book On the Nature of Animals, Aelian writes that animals chosen for sacrifice would voluntarily walk up to the altar to be killed.

As evident from its name the Castello de Venere or Venus Castle is built around the ancient Venus temple in Erice. The decaying twelfth century Norman walls with their weather beaten graying stone exist amidst the ancient ruins of the temple of Venus. This Norman Castle bears the Coat of Arms of Charles V of Spain.

Although the castle is in ruins it offers a glimpse of its rich past and breathtaking views. There are ruins of a Roman bath and well. Legend says that these were the private bath of Venus the Roman Goddess of Love and Beauty. Alternatively as you roam through the ruins of the castle you can see rusting iron shackles hinting of deep dark dungeons and whispering hidden secrets which can make you shudder when there is an eerie silence and fog envelopes the ruins. The castle was used as a prison during World War II. 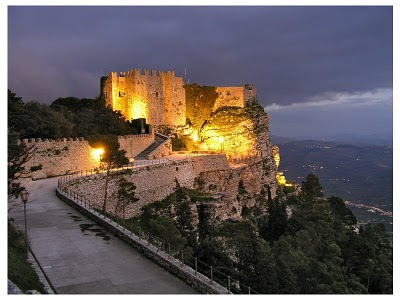 When the cool breeze blows through the walls a mystical atmosphere is created and one can almost imagine the flames of the fire in the Venus temple rising high and guiding sailors navigating the Mediterranean Sea. It is indeed a place of contrasts. There is a tower called the Balio Tower. The castle is situated on the jagged edge of the mountain peak and it almost looks as if the castle is coming out of the rocks. Castello de Venere or Venus Castle gives you such beautiful views that make you think it is worth the climb. Watching the sunset and the sky turn to a myriad of colours is a beautiful site in many parts of the world and Erice offers really stunning sunsets worthy of being captured for posterity through paintings or photographs.

Triangular in shape and filled with cobbled and curving streets and arched passageways Erice is a tourist’s delight as you feel as if you have taken a step back in history. There are various attractions in the city of Erice. They include
Pepoli Castle, Balio Gardens, Cordici Civic Museum, EMFCSC or the Ettore Majorana Foundation and Centre for Scientific Culture, Churches of Chiesa Matrice, Saint John, SanMartino and Saint Ursula. 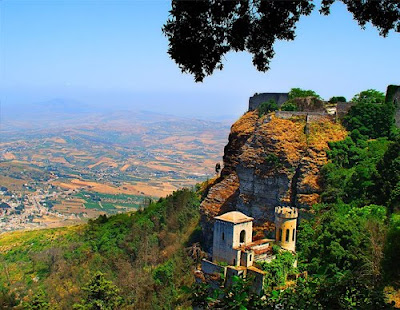 Also Erice is a beautiful city to visit for a holiday and offers culture, food, places to visit and to enjoy delicious Italian/Sicilian food.

Erice hosts an international Week of Medieval and Renaissance Music every summer. This famous event attracts lots of tourists, music lovers, talented performers and music afficionados from all over the world. There is a special procession taken out every Easter.

http://www.ultimateitaly.com/italy-cities/erice-guide.html
Posted by Rajesh. CTR at 10:47:00 AM