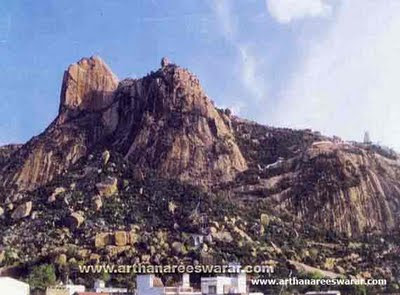 1. Adi Kesava Perumal, enshrined here, instructed Gowri on the Kedara Gowri Vratam which she performed to unite with Shiva as Ardhanareeswarar. One of the 64 manifestations of Shiva - the man-woman form with Parvati constituting the left half of Shiva.

2. A battle of strength between Adi Seshan and Vayu, saw the former clinging tightly to Mount Meru and Vayu using his might to blow it away. The latter succeeded in blowing it away to Tiruchengode and the blood spilled by Adiseshan colored it red. Kamadhenu is said to have obtained 5 hills from Shiva, of which this was one; hence this hill with 2 stories of its origin,with rocks colored both red and yellow represents the masculine and feminine aspects of the Ardhanareeswara manifestation of Shiva.

Period : This ancient hill temple according to the inscriptions on the walls must have been built about 2000 years ago. Many renovation works and additions were done by the kings and chieftains ruled over Tamilnadu in the past.

Description :
The hill, which is about 650 ft. height . The hill is referred in many names like Chemmalai, Nagamalai, Nandhimalai and many more. Ardhanareeswarar - one of the 64 manifestations of Shiva, representing the unity of Shiva and Parvati, is enshrined in this revered hill temple of great significance, acessible by a motorable road; this is an ancient temple mentioned in the Tamil work Silappadikaram as Neduvelkunru. The red color of the hill caused the name Chengode. The image above, shows the view of the surrounding area from the top of the Tiruchengode hill. This temple  is regarded as the 4th of the 7 Tevara Stalams in the Kongu Region of Tamilnadu.

Lord Arthanareeswarar is giving salvation to all souls, from the hill top temple. Lord Sengottuvelavar and Lord Adhikesava Perumal in separate shrines as presiding deities.

Lord Arthanareeswarar has a unique form here, which combines half male and half female form. The lord is also known as Madhorubagan and Ammayappan. It is claimed that this rare posture of the Lord as prime deity can be found only in this temple in the whole of Asia. The hill top temple can be reached by climbing up 1206 steps, made of stone.

The hill which stands in the midst of Thirukodimada Sengundroor and also sung in Thevaram is Nagagiri, it is also called as Nagachalam, Panimalai, Uragaverpu, Siva-malai, Kodaimalai and Deivathirumalai. This divine mountain contains about 350 acres of land which is 2000 feet above sea level . It kindles imagination and appears different from different angles. This is actually formed by Nagamalai and Nandimalai .

North side view gives an illusion that as though, Snakes are spreading its hood. Eastern view supplants as Sivalingam and Western view suggests that a snake is ready to engulp, Southern view resembles Thirukayilai. 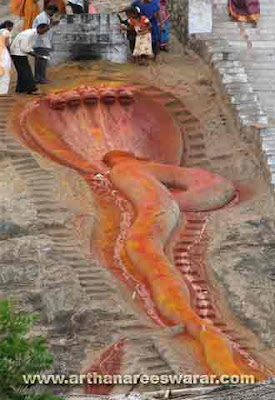 NandhiMalai and NagaMalai is split by a small valley called Nagar pallam. Nagarpallam is the first and foremost past of the huge mountainNagamalai. On either sides of the steps one can see a huge Snake with 5 heads spreading its hood carrying the father of the world as Sivalingam. Over the head of the Snake it is believed that rivers Gange, Yamuna and Saraswathiflow as holy water. People worship this carved stone Snake with Kumkum and camphre. They also make Pongal for the same.

Beyond Nagar pallam after crossing some Mandapas, one has to cross special steps called Arubadam Padi (60 steps) or Sathya Vakku Padi(steps of truth) by the saint ArunagiriNadhar. And among the 1200 steps these 60 steps are considered to be the most important ones. The 60 steps of Sathya Padi is of same order and so there footsteps stands as a good example for the architectural excellence of Tamilians.

If one climbs further about 425 feet the renowned Pandeeshwara temple could be reached.
People fondly call it has Ucchi Pillaiar.Here one could see a Lingam and Pillaiar. On the west of it lies a stone Varadikal (Maladi kal) or Vandhya Paatana Sikara. The childless parents offer their worship to get the boon of a child by the grace of ucchi pillaiar and Ammai Appan Lord Arthanareeswara.

One who thinks Arthanareswara and desire to start circling the Arthanarswara hill and forwarding one foot will get equal benefit of Yagam and for second foot he will achieve the benefit of Raja suya Yagam and with clear mind of third foot will achieve Aswameda Yagam and who continues further will get beneficial of all Yagams.
uring circling we can inspire the fragrance of mooligai which leads to good health.

How to make girivalam

* Everyone should circle the hill with barefoot.
* Mutter the name "Om Namashivaya"
* view the peak of the Arthanareeswara hill during the circling.
* Though there is no restriction to circle the hill with respect to time, it is better to circle during the night, ought to belief of formers and sidhas , at this time heavenly asters circle Arthanareeswara hill along with us.
circling path covers around 7 kms. It takes normally 1 1/2 hours to cover the distance. 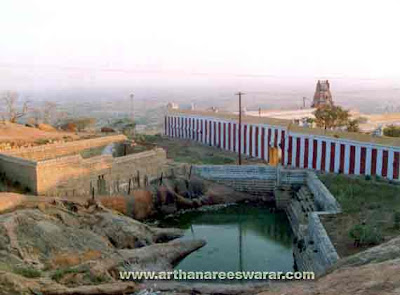 AMMAIYAPPAR THEERTHAM (or Deva theertham) is the most important one as it is found at the feet of LORD ARTHANAREESWARA idol in the sanctum sanctorum. This spring of fresh water came into existence by God's grace and the power of Rishis and Siddhars.

really a good collection of data.

It was a nice experience when I visited this place with my friend... We climbed this hill till top by walk and it took around 1.5 Hrs to reach the top. And also the view of the city from different side of the hill was giving us a different view.

Really very useful information. Many thanks to the author.

I am SARAVANAN...It was an unforgottable moment when I climbed the hill in steps with bare foot.The location of temple and god statue and sculptures are simply amazing.At the top,it was so thrilling when we climb.It was a wonderful moment When we saw the whole city from top.

Thank you so much for all the information provided. Liked the site very much.

Thanks for the information in detail.
surprised at the list of temples you have posted and the way you have presented them.

Thanks madam for your comments. I am still searching for info about more hill temples.