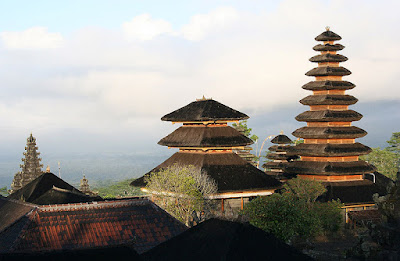 Description : Over a thousand years old, Besakih Temple is known as the "Mother Temple of Bali" Besakih is the biggest and holiest of all the Balinese temples. Bali's mother temple stands against a stupendous mountain backdrop on the southeastern slopes of Mount Agung. Named after the Dragon God believed to inhabit the mountain, it's said to be the only temple where a Hindu of any caste can worship.

Perched nearly 1000 meters up the side of Gunung Agung, it is an extensive complex of 23 separate but related temples with the largest and most important being Pura Penataran Agung. The temple is built on six levels, terraced up the slope. The entrance is marked by a candi bentar (split gateway), and beyond it the Kori Agung is the gateway to the second courtyard.

Pura Besakih is a complex made up of twenty-three temples that sit on parallel ridges. It has stepped terraces and flights of stairs which ascend to a number of courtyards and brick gateways that in turn lead up to the main spire or Meru structure, which is called Pura Penataran Agung. All this is aligned along a single axis and designed to lead the spiritual person upward and closer to the mountain which is considered sacred.

The main sanctuary of the complex is the Pura Penataran Agung. The symbolic center of the main sanctuary is the lotus throne or padmasana, which is therefore the ritual focus of the entire complex. It dates to around the seventeenth century.

A series of eruptions of Mount Agung in 1963, which killed approximately 1,700 people also threatened Pura Besakih. The lava flows missed the temple complex by mere meters. The saving of the temple is regarded by the Balinese people as miraculous, and a signal from the gods that they wished to demonstrate their power but not destroy the monument the Balinese faithful had erected.

Each year there are at least seventy festivals held at the complex, since almost every shrine celebrates a yearly anniversary. This cycle is based on the 210-day Balinese Pawukon calendar year.

It had been nominated as a World Heritage Site as early as 1995, but remains unvested.

Visitors to this temple should exercise caution as there is a syndicate operating in and around the premise of this temple. They target tourists by offering a compulsory "tour guide" at exorbitant charges. They also perform "prayers" and request for tips at the end of the "tour". Visitors who decline their "services" are dealt with rather aggressively.

Illegal forced donations which are actually extortions were committed by local youths from surrounding villages on visiting tourists. Foreign tourists are asked for an additional 50 US dollars to visit, while Indonesians are asked for 200,000 rupiah (~$15 USD). Despite this, the local authorities have done little to stop such acts.