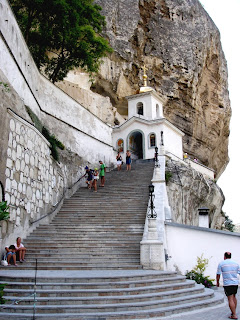 Founded in the 15th century, the orthodox monastery is built in caves in the limestone walls of a spectacular valley leading to the ancient `cave city of Chufut- Kaleh, Crimea, Ukraine

1) In the old days in the valley shepherd named Michael tending the herd. Suddenly he saw a wonder: a rock in seven yards from the ground - the icon of the Virgin and the lighted candle in front of her. Michael hurried home and told about the miracle of the owner. The local prince ordered the icon to be carefully moved to his palace, but when he awoke the next morning he found that the icon had returned to its position on the cliff.
A further attempt to remove the icon met with the same result, and the people realised that they were meant to leave it where it had appeared. Accordingly they built a small chapel in a cave about 20m up in the cliffs and a flight of steps to reach it. The icon was placed in the chapel.

2)  An alternative, and certainly older account of the founding of a monastery here tells how a huge snake or dragon appeared in the valley, preying on both cattle and people. The Greek and Genoese inhabitants at the time were christians and prayed to the Most Holy Mother of God to free them from the monster. One night they saw a candle burning high up on the cliff. When they went to look, they found steps hewn in the rock leading to the candle, which illuminated an image of the Most Holy Mother of God, and nearby the corpse of the dragon. The people cut the corpse into pieces and burnt it, and from that day the place became a holy shrine.

As any other Orthodox monastery, it is very beautiful inside, but it is also unique since it is built inside the rock. You can also find a spring water downstairs in front of the monastery.
It is likely that the site of the existing monastery had religious significance well before the 15th century, and there is evidence of monastic activity here from the 9th century AD. The valley was originally settled by the Greeks and later by the Genoese, and there are Christian graves in the area dating from the 6th century.
The monastery continued to function during the centuries of Tatar rule, and some of the Russian prisoners held in Chufut-Kaleh higher up the valley were allowed by their Tatar captors to attend services there, and to meet the Russian envoy there too on occasions. It fared less well during the soviet period and 7 years after the 1917 revolution it was closed by the government.

During the Crimean war the hospital was settled in it and till now graves of the Sevastopol defence participants lying at the ancient monastery cemetery.
In 1921 the monastery was closed by Bolsheviks, and little by little it had fallen into a state of neglection and began to collapse. Over the past years the main monastery church has been partly restored named after The Virgin Mary Assumption, and in 1993 the male monastery was opened here.