Location : 15km away from Battambang, Cambodia

Legend : Phnom Sampeau is well-known to all Cambodians because of the legend of Rumsay Sok - local legend says that the outcrop is the broken hull of a ship, sunk by a crocodile whose love for Rumsay Sok was unrequited; when she and a prince, her fiancé, took to the sea, they were attacked by the crocodile and drowned. To punish the crocodile the local villages drained the sea until the crocodile died, its body being represented by the nearby Crocodile Mountain.

Temple : The temple on the hill top is a Beautiful Pagaoda named "Wat Phnom Sampeau" 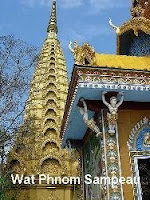 It has a lot of paintings depicting the legend as the one below.

During the Khmer Rouge era, some of the pagoda buildings were used as a prison and interrogation centre – victims were then pushed through a hole in the roof of a cave to fall to their deaths. A narrow rocky path behind the pagoda leads to the bottom of this cave where the remains have been placed in a shrine.

Trekking attractions : Diamond cave, Killing cave and other numerous caves. U can see the details of cave and pics on http://ee.usyd.edu.au/suss/Bulls/46(2)/herriescambodia.html