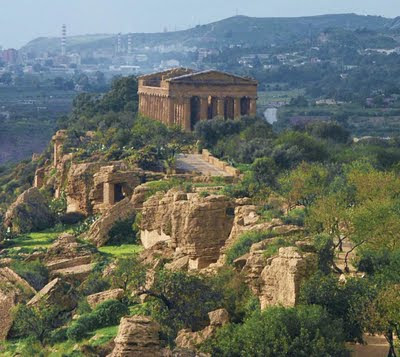 Description : It is one of the most outstanding example of Greater Greece art and architecture, and is one of the main attraction of Sicily as well as a national monument of Italy. The area was included in the UNESCO Heritage Site list in 1997. Much of the excavation and restoration of the temples was due to the efforts of archaeologist Domenico Antonio Lo Faso Pietrasanta (1783-1863), who was the Duke of Serradifalco from 1809 through 1812.

The term "valley" is a misnomer, the site being located on a ridge outside the town of Agrigento.

The Valley includes remains of seven temples, all in Doric style. The identification of the names, apart that of the Olympeion, are a mere tradition established in the Renaissance times. The temples are:

1. Temple of Juno, built in the 5th century BC and burnt in 406 BC by the Carthaginians. The Temple of Hera Lacinia (Juno) is situated at the top of the hill and is traditionally dedicated to the protector of matrimony and childbirth. Built around the V century BC, it was set ablaze by the Carthaginians in 406 BC (evidence of burning is still visible on the walls of the cella). The temple was initially constructed with 34 columns of which 30 still remain standing. To the east is the altar of the temple, while, at the back of the building (beside the steps), there is a cistern.

2. Temple of Concordia, whose names stems from a Latin inscription found nearby, and which was also built in the 5th century BC. Turned into a church in the 6th century AD, it is now one of the best preserved in the Valley.

3. Temple of Heracles, who was one of the most venerated deities in the ancient Akragas. It is the most ancient in the Valley: destroyed by an earthquake, it consists today of only eight columns.

4. Temple of Zeus Olympic, built in 480 BC to celebrate the city-state's victory over Carthage. It is characterized by the use of large size atlases.

5 Temple of Castor and Pollux. Despite its remains include only four columns, it is now the symbol of modern Agrigento.

6 Temple of Vulcan, also dating from the 5th century BC. It is thought to have been one of the most imposing constructions in the valley; it is now however one of the most damaged by the years and natural phenomena.

7 Temple of Asclepius, located far from the ancient town's walls. It was the goal of pilgrimage of people seeking foor healing from illness.

The Valley is also home to the so called Tomb of Theron, a large tuff monument of pyramidal shape; scholars suppose it was built to celebrate the Roman victims in the Second Punic War.