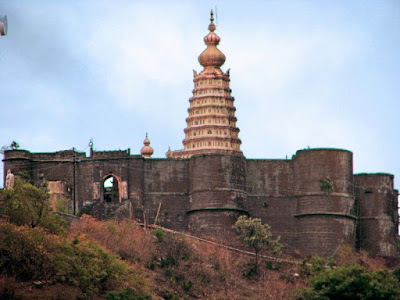 The Yamai Devi Temple is situated in a hill complex in the town of Aundh, Satara district, Maharashtra, India. It is situated 44kms from Satara Bus station.

The legend has it that the goddess Yamai got the name after Goddess Mahalaxmi of Kolhapur and Shri Rama, an incarnation of Lord Vishnu addressed her as 'Ye Mai' in Marathi which literally translated into 'Come Mother' when said in English. Therefore, the goddess of Aundh became famous as Yamai Devi.

The Yamai Devi idol is made of black stone and is in a cross-legged seating position almost 2 meters high. It is the Devi Mahishasur Mardini Yamai goddess idol.

Interestingly, the Yamai Devi temple (aka. Sakhargadnivasini temple)  happens to be the family shrine (Kula daiwat (or) Kula deivam ) of several Marathi families, also known as Kula-Daiwat in the local language. There are several idols of Hindi gods and Goddesses at the top of the temple.  The town and the temple has been associated with the Pant family for many centuries. The present head of this former ruling family, Gayatreedevi Pantpratinidhi, has installed a 7 kilograms (15 lb) solid gold kalash or crown on the pinnacle of the Yamai temple on the hill.

You can reach the top of the hill either by using steps which start at the bottom of the hill or by car using a rather perilous road.

The temple complex also houses the Shri Bhavani Museum established from the private collection of the Maharajas of Aundh. The museum holds paintings by noted 19th and 20th century Indian artists such as M. V. Dhurandhar, Baburao Painter, Madhav Satwalekar and Raja Ravi Varma as well as the famous Mother and Child stone structure by the British artist Henry Moore.

No restaurant or hotel near temples so carry your own food

There is one more temple of Devi Yamai located in the town; apart from the one on the hill.