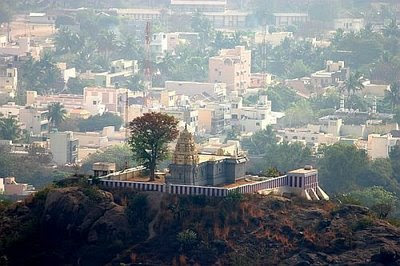 Legend : Pavala Kundru has a rich meaning, dating from the Puranas. It is where Parvati did her tapas, her penance, after blindfolding Siva and bringing destruction to the universe. It is also where she and Siva merged into one, becoming half man and half woman, representing the synthesis of masculine and feminine energies. The Ardhanariswara form illustrates how the female principle of God, Shakti, is inseparable from the male principle of God, Siva.

Description : In recent times Pavala Kundru is associated with Ramana Maharshi’s stay at the Temple. Currently there is a dispute underway regarding construction on the adjacent Coral Hill. But probably the most charming recent assocation of the Temple is its colony of beautiful Langur Monkeys.

History of Pavala Kundru : In 1790 Tippu Sultan captured Tiruvannamalai over-riding the Treaty of Mangalore (1784 A.D.) in which he and the English agreed to mutual restoration of conquests and exchange of prisoners.

Tippu Sultan, it is said, occupied the hillock of Pavalakkunru after destroying the small shrine that was there.Ramana Maharshi said that whatever Temple might have existed on or about Pavalakkunru seemed to have disappeared probably on account of Tippu Sultan’s invasion. The present Temple was probably built only a hundred and fifty years ago.