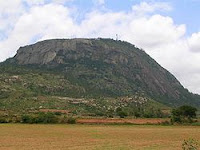 Location : It is situated in the Chikkaballapur district of Karnataka state. It is located just 16 km (till base) 24 km (top of the hill) from Chickballapur town and approximately 60 km from the city of Bangalore.

Description : Nandidurg hill, known commonly as Nandi Hills, gets its name from an ancient Nandi temple situated on this hill. This temple has a thousand year old sculpture of Nandi. Nandi is the bull in Sanskrit, Kannada and Telugu. He is the sacred abode or Vahana to Lord Shiva. An ancient lord Shiva and Parvati temple also adorns this hill. During the Chola reign, Nandi Hills was known as Ananda Giri, Hill of Happiness. There is an ancient temple of Yoga Nandeeswara atop the hill.