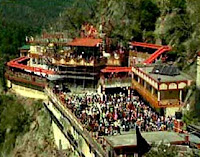 Location : Baba Balak Nath Temple is situated 70km from Bilaspur and 30km from Hamirpur. This place called Deothsidh in the Dhaulagiri Hills of Hamirpur, Himachal Pradesh. It is one of the most significant temples of north India, placed atop an outstanding hill.

Legend : Baba Balak Nath Sidhpeeth is one of the most famous pilgrims in Himachal Pradesh, also known as the God`s own land. The ancient Cave and temple architecture relates to the Deot Sidh era in Hamirpur District. Lakhs of devotees from India and abroad visit this temple to reinforce their firm faith in the "Siddha Tradition". There are a number of myths and legends surrounding the Baba Balaknath Temple in Hamirpur in Himachal Pradesh. The history of this temple states that Baba Balaknath was born in three ages in different forms and in every birth he was a devotee of Lord Shiva. Baba Balaknath worshipped Lord Shiva and even helped out people in distress. Till today pilgrims convey a number of their desires to Baba Balaknath in order to turn them into reality.

Description : A cave, created from rock, enshrines a magnificent idol of Babaji. It is also believed to be the sacred abode of Babaji. Devotees offer `Rot`, prepared with flour and sugar/gur at the altar of Babaji. Some even present goats for sacrifice. However, females are prohibited to enter the inner cave; a raised platform just opposite to the cave has been specially erected for female worshippers for Babaji`s `Darshan`. Six km from Baba Balak Nath Temple, there is spot named Shahtalai, where Baba is assumed to have observed penance. It is also considered exceedingly sacred to the pilgrims. The trustee board, Sidh Baba Balak Nath Temple Trust looks after the proper functioning and maintenance of the temple. Sunday is considered an auspicious day of Babaji, thereby attracting thousands of faithfuls. Una Railway Station is the nearest railhead.

The devotees who visit Baba Balaknath Temple offer Rot along with sugar or Gur (Jaggery) at the altar of Babaji. Females are not allowed to enter the cave and they can only get a glimpse of the idol from an outside dais. During the Navratris, pilgrims throng to the Temple. Government of Himachal Pradesh makes arrangements in tents for their accommodation and provides them with other bare necessities. A few kilometers away from the Baba Balaknath Temple, lies the Shah Talai connected by a ropeway, which is also an important tourist attraction.