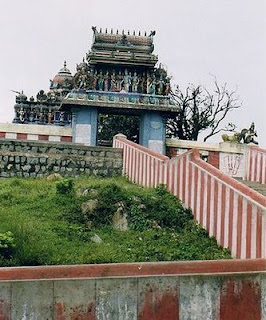 Location : It is located in the Chamarajanagar district of the state of Karnataka,at a height of 1454mt. and is extensively wooded. It is approximately 220 km from Bangalore and 75 km from Mysore on the Mysore Ooty road -10 km away from Gundlupet.

Legend : Legend says that sage Agastya, performed intense penance and as a result lord Vishnu blessed this place and promised to reside here. As this was a place of worship and penance, it used to be called as 'Hamsatheertha', which means the lake of swans in Sanskrit. Swan acquires a mythological significance in Hinduism, symbolizing knowledge, tranquility and salvation.

Temple : This temple was built by the King Chola Ballala during AD 1315. Later the Wodeyars of Mysore who were ardent devotees of Lord Venugopala displayed keen interest in maintaining the hill temple. The temple is dedicated to Gopalaswamy, which is one of the names of the Hindu God Krishna. The gopuram of the temple is single-tiered and rests on the compound wall of the enclosure. A dhwajastambha (flag-pillar) and a bali-peetam (sacrificial altar) is present in the mukha mantapa (inner-porch). The parapet wall of the facade of the mukha mantapa contains the sculpture of dashavatara (the avatars of the Hindu God Vishnu) with the centre portion of the sculpture depicting Krishnavatara (the avatar of Vishnu in which he appeared as Krishna). There is a shikhara tower over the garbha griha (sanctum sanctorum).

The garbha griha contains an idol of Krishna holding a flute under a tree. Krishna is flanked by his friends and the posture is that of a dance with the left big toe resting on the right one. The panel also features several characters and icons from Krishna's avatar.

Lord Gopalaswamy's idol is flanked by his consorts, Rukmini and Satyabhama. Cows and cowherds are featured towards the right side of the panel.

Access : There is a motorable road all the way to the top of the hill. Entry fee is collected at the forest depeartment checkpost at foot of the hill. Visitors are allowed from around 6am till 5pm. Overnight stay on top is not allowed. Trekking and videography in the surrounding hills are allowed only with prior permission and to be accompanied by the forest department guides.

There is a forest department guest house at the top of the picturesque hill, which can be reserved in advance through the forest office in Mysore or Bandipur. The guest house provides basic accommodation, food and other essentials should be brought along by visitors.