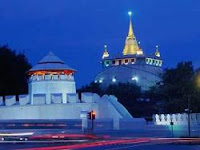 Description : It rises within the compound of Wat Saket, an unusual temple that houses Buddha relics within its 58-metre-high chedi surmounted by a golden cupola.

The temple dates back to Ayutthaya era, when it was called Wat Sakae. King Rama I renovated the temple and renamed it to Wat Saket. During the reign of King Rama III the Chedi Phu Khao Thong (Golden mountain) was added to the temple. It was finished under King Rama V and then named Suwannabanphot. This building has become a popular tourist attraction in Bangkok.

The religious visitors place flowers near the date of the month they find auspicious and light candles. As you climb to the top, enjoy magnificent panoramic views of Bangkok. The cupola is covered with small golden squares reflecting in the sun and giving the place the name of Golden Mount.

Festivals : Wat Saket hosts an enormous annual temple fair in the first week of November, when the mount is illuminated with coloured lanterns and the compound turns into a massive fun fair. Admission to the chedi costs 10 baht.
Posted by Rajesh. CTR at 8:21:00 PM