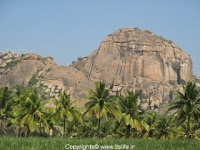 Legend : The hill is named after the mother of Pandavas/five brothers in Mahabharatha. The legend of this place narrates that Pandavas spent the last few days of their exile in the hills and named the hill after their mother Kunti whom they missed. Kunti Betta is the location where Bheema destroyed the demon Bakasura. The town nearby is called as Pandavapura after the Pandavas.

Diety : The temples are dedicated to Kunti, Mallikarjuna / Shiva and Lord Rama.

Description : The hill has twin peaks with rocks uniquely arranged with clumps of trees growing here and there. It is a perfect place to try rock climbing or to trek on the path and visit some interesting sites pertaining to the legends associated with the place

As the climb gets steeper you will be surprised to land on a flat terrain, where there is evidence of the land having been cultivated a few centuries ago. This place has a rock pond (water collects in the rock like a pond) known as Kunti Kola and a footprint of Bheema is present on the rock.

The hill was also popularly known as French rocks as the French troops had camped in this region in the 18th century to help Tipu Sultan in his war against the British. From the top of the hill the expanse of Tonnur Kere/lake can be viewed.
Posted by Rajesh. CTR at 12:20:00 PM