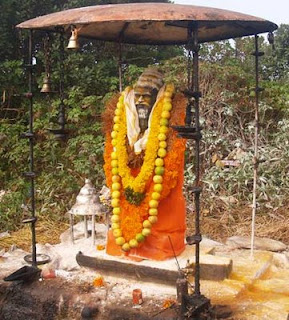 Location : It is a 1,868 metres (6,129 ft) peak within Neyyar Wildlife Sanctuary in the Western Ghats of South India. The mountain lies on the border between the Indian states of Kerala (in Kollam and Thiruvananthapuram District) and Tamil Nadu (in Tirunelveli). The perennial Thamarabarani River originates from this hill and flows into the Tirunelveli District of Tamil Nadu.

Description : Agastya Mala is a pilgrimage centre for devotees of the Hindu sage Agastya, who is considered to be one of the seven rishis (Saptarishi) of Hindu Puranas.

There is a full-sized statue of Agastya at the top of the peak and the devotees can offer pujas themselves. Agasthyar was a sage of Dravidians and is considered to be one of the seven Rishis (Saptharshis) of Hindu mythology. Tamil language is considered to be a boon from Agasthyar.
Posted by Rajesh. CTR at 8:05:00 PM

Thanks for this information about Agathiya Muni.
Could you please direct to reach the hill?
I am from Chennai would like to make a trip.
Is there a guide available nearby this mountain?
I am looking for a positive response and guidance.
My mail ID: rm5868@gmail.com

hello raju mani
Pls contact my friend Prabhakaran who can guide u and even take u with their regular visit to Agastiya malai. His website is http://www.divinetrekking.blogspot.in and mobile no is : 8903167991