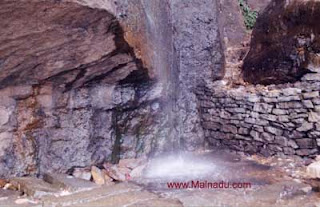 Description : To the north of Chikmaglur town is the Baba Budan Range or Chandra Drona Parvatha as it was known in the ancient times, which has one of the highest mountain peaks between the Himalayas and the Nilgiris.

The loftiest point of the range is Mullaiyanagari, which is 1926 m above sea level. A beacon lighted here during Deepavali can be seen at Chikmagalur.

The peak takes its name from the Muslim saint, Baba Budan, who resided here more than 150 years ago and reared coffee from the seeds he had secured from Yemen.
Bababudangiri mountain boasts of the Dattatreya peeta (a Hindu temple) and a Muslim dargah in the same premises. They are present side-by-side in the same underground cave.

Caves : Three large caves here said to have been sanctified by 3 siddhas contain their icons and gaddiges (tomb) and an annual 'jatra' is held here in their honour.

The enthralling scenery around makes this a much frequented pilgrim centre. Seethala contains a 'matha' and the dual shrine temple of 'Seethala-Mallikarjuna'.

Gada Theertha, according to a myth was created by the pandava prince, Bheema with his 'gada', the club, to quench the thirst of his mother during their exile.

The Ritual : Pilgrims who bathe here in the Nellikayi Theertha formed by Manikya Dhara waterfall, leave behind one item of their clothing as per a local belief.
Posted by Rajesh. CTR at 8:56:00 PM