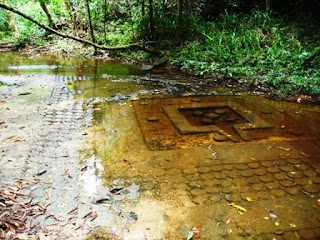 Location : It is an Angkorian era site on the southwest slopes of the Kulen Hills in Cambodia, 25 km from the main Angkor group.

Description : It is commonly known as the valley of a 1000 Lingas. It consists of a series of stone carvings in and around the Stung Kbal Spean river. The motifs for the stone carvings are roughly three: myriads of lingams, depicted as neatly arranged bumps that cover the surface of a rock; lingam - yoni designs; and various Hindu mythological motifs, including depictions of gods and animals.

The majority of Kbal Spean's archaeological vestiges date to the 11th to 13th centuries. Construction of Kbal Spean was started by King Suryavarman I and later completed by King Udayadityavarman II. 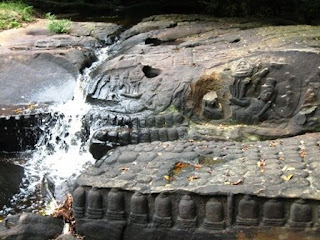 It is commonly known as the valley of a 1000 Lingas due to the presence of the estimated one thousand lingas, which are sculptures dug in the Siem Reap riverbeds. Lingas were believed to fertilize the water of the East Baray and irrigate the rice fields in Cambodia.
Posted by Rajesh. CTR at 7:51:00 PM