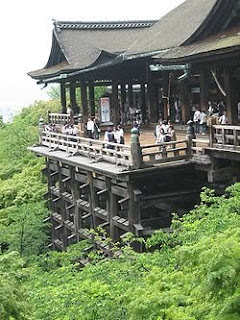 Name : Kiyomizu (full name Otowa-san Kiyomizu-dera). It takes its name from the waterfall within the complex, which runs off the nearby hills. Kiyomizu means clear water, or pure water.

Description : It was founded as early as 798 by the Hosso sect of Buddhism, as one of the six virtually extinct schools of Nara Buddhism. The present buildings were reconstructed in 1633 and some were recently restored.

The Veranda : The main hall has a veranda, supported by tall pillars, that juts out over the hillside and offers impressive views of the city. The popular expression "to jump off the stage at Kiyomizu" is the Japanese equivalent of the English expression "to take the plunge". This refers to an Edo period tradition that held that, if one were to survive a 13m jump from the stage, one's wish would be granted. Two hundred thirty-four jumps were recorded in the Edo period and, of those, 85.4% survived. The practice is now prohibited.

The Waterfall : Beneath the main hall is the Otowa waterfall, where three channels of water drop into a pond. Visitors to the temple collect the water, which is believed to have therapeutic properties, from the waterfall. It is said that drinking the water of the three streams confers wisdom, health, and longevity.[5] However, some Japanese believe that you must choose only two — if you are greedy and drink from all three, you invite misfortune upon yourself.

Festivals : The site is particularly popular during New Year's and obon (Japanese Buddhist custom to honor the departed spirits of one's ancestors in the summer)
Posted by Rajesh. CTR at 6:46:00 AM