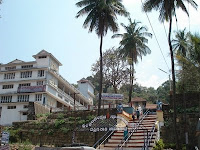 Location : Just half an hour away from Horanadu is the temple of Kalasa. This is a temple on a hill, on the foothills of which flows the Bhadra River in Karnataka. This place seems to be a picnic spot, as it was filled with people even in may when there wasn’t that much water in the river. One has to climb a few steps to get to the temple.

Description : At the entrance of the temple are the statues of two elephants, regarded to be Ganesha and a she-elephant, his wife. It is believed that there was an Asura here, to kill whom, Ganesha descended on earth. The magical Asura took the form of a tree, and Ganesha assumed the form of an elephant to uproot him. Seeing the struggle, a she elephant in the forest came to help, and along with Ganesha succeeded in uprooting the tree and putting an end to the Asura. Since he had touched the she-elephant during the fight, Ganesha married her, and decreed that she should take her place by his side at this place. Both the elephant statues look identical, except that the male one is depicted as trampling the Asura beneath his foot. The idol of kalaseshwara, a lingam, is believed to be Shiva who manifested himself in a kalasam, a vessel in which water is kept, to the great rishi, Agasthya.
Posted by Rajesh. CTR at 11:36:00 PM