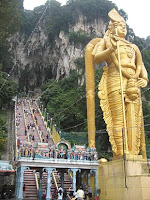 Location : Batu caves is a limestone hill, which has a series of caves and cave temples, located in Gombak district, 13 kilometres (8.1 mi) north of Kuala Lumpur, Malaysia. It takes its name from the Sungai Batu or Batu River, which flows past the hill. Batu Caves is also the name of the nearby village.

Description : The cave is one of the most popular Hindu shrines outside India, dedicated to Lord Murugan. Batu Caves was promoted as a place of worship by K. Thamboosamy Pillai, an Indian trader. He was inspired by the 'vel'-shaped entrance of the main cave and was inspired to dedicate a temple to Lord Muruga within the caves.

Wooden steps up to the Temple Cave were built in 1920 and have since been replaced by 272 concrete steps. Of the various cave temples that comprise the site, the largest and best known is the Temple or Cathedral Cave, so named because it houses several Hindu shrines beneath its 100 m vaulted ceiling.

Rising almost 100 m above the ground, Batu Caves temple complex consists of three main caves and a few smaller ones. The biggest, referred to as Cathedral Cave or Temple Cave, has a 100 m-high ceiling, and features ornate Hindu shrines. To reach it, visitors have to climb a steep flight of 272 steps.

At the base of the hill are two more cave temples, Art Gallery Cave and Museum Cave, both of which are full of Hindu statues and paintings. This complex was renovated and opened as the Cave Villa in 2008. Many of the shrines relate the story of Lord Murugan's victory over demon Soorapadam. An audio tour is available to visitors.

The Ramayana Cave is situated to the extreme left as one faces the sheer wall of the hill. On the way to the Ramayana Cave, there is a 50-foot (15 m) tall murti of Hanuman and a temple dedicated to Hanuman, the noble monkey devotee and aide of Lord Rama.

A 42.7m (130 feet high) high statue of Lord Muruga was unveiled in January 2006, having taken 3 years to construct. It is the tallest Lord Muruga statue in the world.

Festivals : It is the focal point of Hindu festival of Thaipusam in Malaysia which attracts over 1.5 million pilgrims yearly, making it one of the largest annual gatherings anywhere in the world.

This is a nice blog that i have come across. Its nice that traditions are still remembered and respected around the world , inspite of racism, power or religious dominations.
Keep up and carry on this to the younger generations, atleast they wud know wat HUMANITY is.