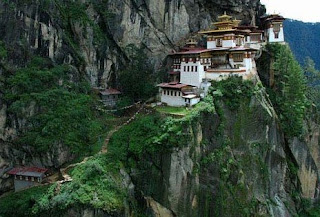 Legend : The name Taktsang (stag tshang) means "Tiger's lair", the legend being that Padmasambhava (Guru Rinpoche) flew there on the back of a tiger.

In the 8th Century CE Guru Rinpoche visited Bhutan and blessed it as the second Kailash. At that time malignant spirits abounded and, in order to subdue them, he assumed the terrifying form of Guru Dorje Dröllo one of the Eight Manifistations of Guru Rinpoche (gu ru mtshan brgyad) and consecrated Paro Taksang as a sacred site to protect the Dharma and subdue harmful forces.

Description : It is one of the most famous Buddhist monasteries in Bhutan. It was built around the Taktsang Senge Samdup cave where Guru Padmasambhava is said to have meditated in the 8th Century. Completed in 1692, today it is the most well known as thirteen taktsang or "tiger lair" caves.

The monastery includes seven temples which can all be visited. The monastery suffered several blazes and is a recent restoration. It has survived four catastrophic fires and an earthquake. Visitors ascend the slope to the monastery on foot or on mule-back.

Hiking Adventure : Start the day with a short drive to Sartsam Chorten. From here you hike (1 ½ hours) to the viewpoint of the monastery. The trail climbs through beautiful pine forest, many of the trees festooned with Spanish moss, and an occasional grove of fluttering prayer flags. Stop for a rest and light refreshments at the Taktsang Jakhang (cafeteria) and then walk a short distance until you can see, clearly and seemingly within reach, the Taktsang monastery.

Pilgrimage to Paro Taktsang : Those who wish to go on pilgrimage to Paro Taktsang and nearby sacred sites, should obtain a special permit from the Department of Culture, Ministry of Home & Cultural Affairs, Thimphu. In order to maintain the sanctity of the place, ordinary tourists without a permit may not be allowed to go beyond Tsogyal Pangchung (meadow of Yeshe Tsogyal) before the Shelkarchu waterfall. At that place there is however an excellent view of Taktsang and a place to offer butterlamps.

The complete pilgrimage to Taktsang consists of an outer (), middle () and inner() pilgrimage ( explained clearly in the website : http://rywiki.tsadra.org/index.php/Paro_Taktsang