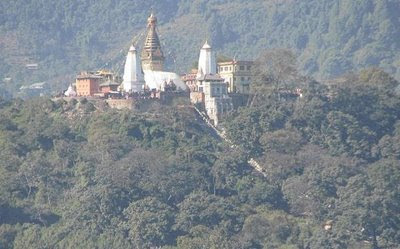 Name : Swayambhunath sometimes called as Swoyambhunath. It is also known as the Monkey Temple

Legend : According to Swayambhu Purana, the entire valley was once filled with an enormous lake, out of which grew a lotus. The valley came to be known as Swayambhu, meaning "Self-Created." The name comes from an eternal self-existent flame (svyaṃbhu) over which a sūpa was later built.

Swayambhunath is also known as the Monkey Temple as there are holy monkeys living in parts of the temple in the north-west. They are holy because Majusri, the bodhisattva of wisdom and learning was raising the hill which the Swayambhunath Temple stands on. He was supposed to leave his hair short but he made it grow long and head lice grew. It is said that the head lice had transformed into these monkeys.

The Bodhisatva Manjushri had a vision of the lotus at Swayambhu and traveled there to worship it. Seeing that the valley can be good settlement and to make the site more accessible to human pilgrims, Manjushri cut a gorge at Chovar. The water drained out of the lake, leaving the valley in which Kathmandu now lies. The lotus was transformed into a hill and the flower become the Swayambhunath stupa.

Description : Swayambhunath is one of the most sacred sites of Buddhist pilgrimage in Nepal, but second only to Boudhanath for Tibetan Buddhists.

The Swayambhunath complex consists of a stupa, a variety of shrines and temples, including a Tibetan monastery, a museum and a library. The stupa has Buddha's eyes and eyebrows painted on. Between them, there is something painted which looks like the nose - but is the Nepali symbol of 'unity', in the main Nepali language dialect. There are also shops, restaurants and hostels.

The site has two access points: a long stairway, claimed to have 365 steps, leading directly to the main platform of the temple, which is from the top of the hill to the east; and a car road around the hill from the south leading to the southwest entrance.

The first sight on reaching the top of the stairway is the biggest Vajra (thunder-bolt scepter) ever seen. Behind this vajra was the vast, round, white dome of the stupa, like a full solid skirt, at the top of which were two giant Buddha eyes wisely looking out over the peaceful valley which was just beginning to come alive.

History : According to the Gopalarajavaṃsavalī Swayambhunath was founded by the great-grandfather of King Manadeva (464-505 CE), King Vrsadeva, about the beginning of the 5th century CE. This seems to be confirmed by a damaged stone inscription found at the site, which indicates that King Manadeva ordered work done in 640 CE.

However, Emperor Ashoka is said to have visited the site in the third century BCE and built a temple on the hill which was later destroyed. Legend has it that the Buddha himself visited Swayambhunath and gave teachings there two hundred years earlier.

Although the site is considered Buddhist, the place is revered by both Buddhists and Hindus. Numerous king Hindu followers are known to have paid their homage to the temple, including Pratap Malla, the powerful king of Kantipur, who is responsible for the construction of the eastern stairway in the 17th century.

Symbolism : The dome at the base represents the entire world. When a person awakes (represented by eyes of wisdom and compassion) from the bonds of the world, the person reaches the state a bit higher. The thirteen pinacles on the top of it symbolises that sensient beings have to go through the thirteen stages of enlightenment to reach Buddhahood.

On each of the four sides of the main stupa there are a pair of big eyes which represent Wisdom and Compassion. Above each pair of eyes is another eye, the third eye. Saying goes that when Buddha preaches, cosmic rays emanate from the third eye which acts as message to heavenly beings, so that those interested can come down to earth to listen to the Buddha. The hellish beings and beings below the human realm cannot come to earth to listen to the Buddha's teaching, however, the cosmic ray relieves their suffering when Buddha preaches.

Each morning before dawn, hundreds of Buddhist (Vajrayana) and Hindu pilgrims ascend the 365 steps from eastern side that lead up the hill, passing the gilded Vajra (Tibetan: Dorje) and two lions guarding the entrance, and begin a series of clockwise circumambulations of the stupa.

Websites :
http://en.wikipedia.org/wiki/Swayambhunath
Posted by Rajesh. CTR at 7:10:00 AM