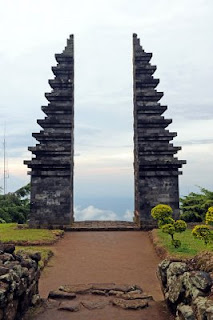 Description : Inscriptions found here is evidence to the fact that the Candi Ceto temple dates back deep into history. Some of the dates found inscribed here are AD 1468, 1472 and 1475. The basic layout and design of the temple is similar to that of the Sukuh temple but the Candi Ceto temple has many more terraces. There are as many as 14 terraces. As at Candy sukuh the main deity portrayed here is Bima. Tattered fragments of narrative relics were found in one of the lower terraces. This apart there are large numbers of small stone turtles.

One of the most interesting remains found here at the Candi Ceto is a dilapidated figure lying flat on the ground. At the western end is a large linga similar to that found at Candi Sukuh , lying horizontally and pointing to the west. At its base is a composition representing a tortoise on the back of a huge bat. On the tortoise's back is a number of sea creatures pointed in various compass directions.

During the 1970s a new gateway was built. New structures were also added to the upper terraces which include stone walls and floors. 50 meters further up, there are slopes which are used for bathing purposes. Several statues and a wooden shrine are to be found here. Till the late 1970s high profile people used to come here to meditate. They believed that this place had supernatural powers. Local residents still continue to devote offerings for the deities.

excellent info; thanks; have benefited a grt deal; keep it up; we appreciate.