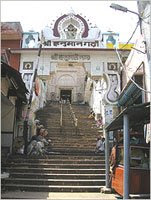 Location : Situated in the center of Ayodhya, this temple is approachable by a flight of 76 steps.

Legend : It is said that Hanuman lived here in a cave and guarded the Janambhoomi or Ramkot. The main temple contains the statue of Maa Anjani, with Bal Hanuman seated on her lap. The faithful believe that all their wishes are granted with a visit to this holy shrine.

Hanuman Garhi is located in a fort situated at the western gate of Ram Kot as a place of watchman. Hanuman ji, (a brave devotee to Lord Ram) is considered (on the basis of mythological faith), the Kotwal (watchman) of Ayodhya city.

King Vikramaditya constructed this temple of Hanuman ji. After a period Nawab Mansoor Ali constructed a fort around the temple through Tikait Rai which is now famous as Hanuman Garhi. In this temple, golden idol of Shri Hanuman ji in the lap of his mother Anjani is established.

For the management of Hanuman Garhi, there are four arrays of saints named as Haridwari Patti, Basantia Patti, Ujjainia Patti and Sagaria Patti. They have their own Chief as well as a principal Chief who is known as Gaddinashin.

At present, Mahant Shri Ramesh Das is Gaddinashin. In this temple, anniversary of Shri Hanuman ji is celebrated with great enthusiasm.

A massive structure in the shape of a four sided fort with circular bastions at each corner houses a temple of Hanuman and is the most popular shrine in Ayodhya.
Posted by Rajesh. CTR at 9:52:00 PM