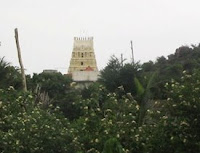 Location: Pazhaya Seevaram is one of the famous temple of Sri Lakshmi Narasimhar. This sthalam is found in between Chengalput and Kanchipuram, on the shore of River Palar. There are lots of buses available from Kanchipuram to this Temple.

This sthalam is one among the sthalam that is found in the hilltop where Sri Narasimhar along with the Thaayar gives his special seva to His Bhaktas. The mountain, which is found, is called with the name “Padmagiri”. This kshetram is also called with name as “Sathya Varadha Kshetram”.

On hearing this, Mareecha muni, one among the muni in that group answered that there exists an sthalam, where the Perumal has already given full palan (credit) for the tapas and is gifted with nature’s beauty. He also added that the muni, who got the seva of the Perumal, is Atthiri Muni and he the wish of seeing the Perumal in Archai roopam and performed severe tapas in the place “Padmagiri”. And as a result of the tapas, the Perumal came in front of him in the form of Sri Lakshmi Narasimhar. Atthiri muni wished that the Perumal should stay in that place and the entire Bhaktas of Human community.

In Krutha yugam, there lived a great Sri Vishnu Bhaktan, who wanted to take bath daily in the river Ganga, which emerges from the foot of Sriman Narayanan. He took bath in this Sangamam and treated this water as the Ganga River and worshipped the Perumal in Sudharsana Malai (mountain). Another saint lived here and treated this river as the river Yamuna. Because of this, both the rivers Yamuna and Ganga emerged here and the other river Vegabagha (Saraswathi river) also emerged and these 3 rivers merge in the great Pazhaya seevaram sthalam. This river flows in between Padmagiri and Sudharsana malai.

It is 100% evident that if you take bath in this river and get the seva of Sri Lakshmi Narasimhar in Padmagiri and Sri Venkatesa Perumal in Sudharsana malai is equivalent to 100 times to that of taking bath in Prayagai.

It is also 100% evident that if we take bath in this river for a month without any interruption and be rested under the shadow of Pippali tree in Padmagiri, is said to cure all sorts of sins and diseases.

Sudharsana Malai (mountain):
On the opposite side of Padmagiri (also called as Seevara malai) another mountain is found which is called as “Sudharsana malai” where Sri Prasanna Venkatesa Perumal is giving his seva. This Perumal gave his Prathyaksham to Brighu Muni and King Chakravarthy.

Festivals - Paarvettai and Seevaram : During the 3 day of Pongal festival in Thai month (Jan 14 – Feb 15), the utsavar Sri Varadhar of Sri Varadharajar temple, Kanchi is taken towards this Seevaram sthalam and this is one among the great utsavam of Sri Varadhar (Malai utsavam).

Lots of Bhaktas from Various parts come to Seevaram to visit Sri Varadharajar and Seevaram Paarvettai Utsavam is one of the worlds known utsavam among Sri Vaishnavites.

Not only in religious way, this sthalam is said to be an sthalam, which is surrounded by herbal trees, silent atmosphere and can cure lots of diseases as it is.

The temple is maintained in a great manner by the authorities. In the districts, this is one among the great sthalam and well-maintained sthalam and has been very appreciated by the government for maintaining the temple in a good way.