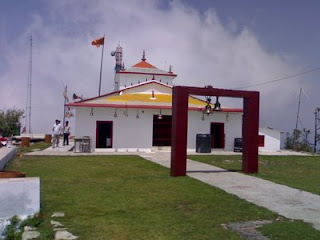 Location : It is about 8 km. from Dhanolti on the motor road running from Mussoorie to Chamba and is connected with Narendra Nagar which is about 61 km. and with Tehri which is about 41 km. by motor roads in Uttaranchal. To reach the temple one has to leave the Mussoorie-Chamba road at Kadu Khal and climb a steep ascent of about 1.5 km. on foot.

Legend : The legend is that Sati, the wife of Siva, gave up her life in the yajna by her father. Siva passed through this place on his way back to Kailash with the dead body of Sati whose head fell at the spot where the temple of Surkhanda Devi stands.

Description : Surkhanda Devi temple is at an altitude of 2903 m and ringed by dense forests in a sanctified spot. People from all corners throng to this shrine. For reaching the temple, one has to walk 2 km from the motor road at Kaddulkhal.

Provides a panoramic view of the Himalayan peaks and the Bhagirathi river. It is placed in the midst of an apple growing region.

Festivals : Ganga Dussehra Fair held every year between May and June, attracts thousands of devotees.